Cillian Murphy on the Leaving Cert: ‘It was a dark year. . . I still have nightmares about it’

Scarred by his school experiences, the actor is helping to promote empathy education 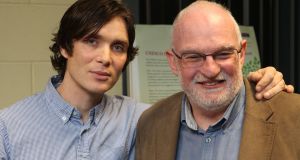 Cillian Murphy has a recurring dream: he’s in his school uniform, sitting at a desk and in the thick of the Leaving Cert all over again.

“There are kids who really suffer mentally and feel under such intense pressure because of the bottleneck of a points system we’ve developed,” says the actor.

“I’m lucky in that I was never prone to depression or panic attacks, but that year was a dark year. I still have nightmares about it, even more so than walking on stage.”

Bright, creative young people get eaten up by a system which, he says, does little to recognise their full range of talents or abilities.

“I just felt as if it was going to be the defining moment in my life and if I didn’t succeed in my exams, I would never succeed at anything.”

Ironically, while Murphy went on to study law at University College Cork, he dropped out half way through his second year to become a full-time actor.

“It [the Leaving Cert] was of no use to me, other than putting me in a spin . . . it works for some kids really, really well: those who can absorb facts, regurgitate them and are hugely academic.

“I don’t want to be a preachy actor on this, but I just know that my experience was one thing; others may have experienced other things.”

Murphy is not critical of teachers. His family is steeped in education – his mother taught French and his father was a schools inspector – but he is fiercely critical of the wider system.

As a father of two boys, aged 11 and 9, he would love to think they will experience a broader and more holistic approach to education instead of a pressure-cooker points race.

It’s one reason why Murphy has opted to get involved in a new project being developed by Prof Pat Dolan, director of the Unesco Child and Family Research Centre at NUI Galway, on promoting empathy among schoolchildren.

These emotional skills are just as important as academic performance, yet they are neglected by the education system, Dolan argues.

Educators and parents have long assumed that empathy is simply innate. However, more and more research shows empathy can be learned and activated through training.

Social media, he says, is contributing to a lack of connectedness which means people can be more likely to say or do things without thinking of its impact on others.

This absence of empathy can be highly corrosive and, in extreme cases, can be linked to youth radicalisation. This why it it is so important that we foster these skills at school, says Dolan.

“It can be crushed, or it can flourish,” says Dolan. “When kids go to school, we automatically assume they need to learn maths, reading and writing. But we should also assume that kids need to learn empathy.

“Imbuing empathy in young people can be one of the most positive and instrumental steps we can take,” he says.

Dolan, in collaboration Prof Mark Brennan at Penn State, is developing models for empathy education for young people for use in school and community settings.

For the past three years, they have piloted projects with a number of Foróige youth clubs across the country.

They involved training up young people as researchers , investigating an issue, making a short video capturing the results.

As part of this “youth as researchers” initiative – founded by Prof Dolan with a colleague Dr Danielle Kennan – participants have the freedom to explore topics that resonate with them.

Jack Kavanagh, a Leaving Cert student, was involved in one of the projects at his local Foróige club in Tallaght.

He, along with other young people, focused on the experiences of LGBT young people in the locality just before they had come out.

Most had very high levels of anxiety and were unaware of any support groups available.

The resulting video they made forms the basis for a 40-minute class on exploring these issues.

“I think it gave those involved a greater perspective of how their fellow classmates or friends were going through and the value of providing simple support and understanding,” he says.

“We find that young people – because they are so idealistic – are very open to developing empathy. We’re seeing that it is really is a skill, just like any other. It can be taught and mastered.”

Given the introduction of wellbeing education to the new junior cycle, many teachers may wonder if there really is a need for empathy education in a crowded curriculum.

Dolan argues that wellbeing education – while important – does not specifically cultivate empathy and says there is plenty of scope to include it in first, second or transition year at school.

“There is a wider argument here over what kind of education system do we want for young people? Do we really want the pressure-cooker approach? I think it’s harmful to young people. It’s almost a form of abuse . . . We need to consider reform and the space for a more open approach,” Dolan says.

Murphy, meanwhile, who is patron of the Unesco Child and Family Research Centre at NUI Galway, believes the demand for empathy training is set to grow and grow.

“In the past, where there was bullying, it took place physically or verbally. The bully could see the consequences in front of him.With social media, you don’t. So people seem to think they can act with impunity – and that is terrifying”

Tackling this through promotion of empathy will be an uphill task, says Murphy, but it can be done.

“In secondary school, the pressure can be intense and there’s also the competition to be popular, to look good, all of that.

“ So a little of bit of time to let people talk about each others’ feelings would be a huge boost for people’s self-esteem.

“The system doesn’t allow for that right now. . . once you get into first year at second level, you’re in that train and heading towards the Leaving Cert. The system we have evolved over time, and dismantling it will take a huge amount of time and will concentrate minds for many years.

“I’m well aware of the burden teachers are under and how much it takes from a human’s life, teaching and giving that much to kids every day. . . any adjustment will be tricky, but there is a great momentum behind this. .”

A conference on “rediscovering empathy”, organised by the Unesco Child and Family Research Centre, will take place on June 8th and 9th, 2017, at the Institute for Lifecourse and Society at NUI Galway. childandfamilyresearch.ie

Any schools or youth groups interested in the “youth as researchers” programme for their school can contact Prof Dolan via gillian.browne@nuigalway.ie