Coláiste Eoin beats competition from 700 other entrants to win overall prize of €2,000 with a song, titled ‘Take Your Mask Off’ 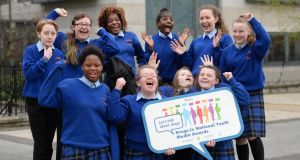 The students of Coláiste Eoin secondary school in Finglas fended off competition from 700 other entrants to claim the top prize at the Drugs.ie National Youth Media Awards on Wednesday.

Now in its third year, the ‘Let’s Talk About Drugs’ National Youth Media Awards partnered with The Irish Times for the first time this year, and judges from different sectors of the media were tasked with sifting through videos, articles, posters and songs to choose the top entries.

Organised by the Ana Liffey Drug Project in Dublin the competition aims to create a greater understanding among young people about issues surrounding drugs and alcohol use.

The students from Coláiste Eoin achieved the landmark distinction of being the first group to win the overall prize of €2,000 with a song, titled Take Your Mask Off, following consecutive victories for video entries over previous years.

The competition was open to young people aged between 12 and 25, and prize winners in different age categories received iPad Minis.

Speaking at the event, Ana Liffey Drug Project director Tony Duffin said the awards are a catalyst for discussion among young people about issues relating to drugs and alcohol.

“It’s important that we all continue to engage with young people in a meaningful and credible way in an attempt to inform them of the potential harms of drug or alcohol use,” he said, continuing:

“We must also consider our own behaviour and, if we use drugs or alcohol, what impact this may be having on the young people in our lives.”

“This is why the Ana Liffey is very proud to be involved with the 2017 Drugs.ie Media Awards. This annual competition continues to act as a catalyst for young people to engage in a constructive discussion about drugs and alcohol with their teachers, peers and family.”

Guest of honour at the awards ceremony in Dublin was RTÉ presenter Bláthnaid Treacy who said the initiative facilitates “meaningful discussion” on the topic.

“We can encourage young people to gain an understanding of issues associated with drug and alcohol use by exploring and discussing these issues with others, including their peers.

“By doing this, young people can also learn to make more informed decisions about their own drug and alcohol use in the future,” she said.