Access to low-cost funding crucial to expansion in higher education 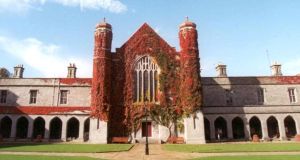 NUI Galway borrowed €60 million from the European Investment Bank for student residences and a new building for the college of medicine, nursing and health sciences.

Just last month NUI Galway was the latest university to benefit from a €60 million loan to help transform its campus.

The money from the European Investment Bank (EIB), Europe’s long-term lending institution, will finance the construction of much-needed residences for hundreds of students and a new building for the college of medicine, nursing and health sciences.

The developments are crucial for a university that, like other third-level institutions, is under pressure and needs to expand to cope with a rapid projected increase in student numbers.

Numbers entering higher or further education are set to climb by more than 25 per cent over the coming decade.

Places simply must be provided.

Given that higher education and research will be ever more important to national growth and prosperity, it is vital that universities have access to resources to allow them to do this.

Borrowing has been key to keeping the sector’s head above water over the past decade, at a time of shrinking State investment and rising student numbers.

Universities have borrowed almost €700 million from the EIB alone over the past decade to expand and upgrade their creaking infrastructure.

It will be key over the coming years as well.

The Cassells report into the future financing of higher-education projects that €5.5 billion will needed over the next 15 years to cater to student numbers, capital upgrades, health and safety issues, equipment renewal and ongoing maintenance.

But there is now uncertainty over the capacity of universities to borrow into the future.

This is due to a review by Eurostat, the European Union statistics agency, which is examining whether universities should be included on our national accounts. It will make the decision based in part on an analysis by the Central Statistics Office (CSO).

It is using two broad measures to examine how reliant the sector is on the State: a market test and a control test.

There are few concerns over the former, given that universities are increasingly generating the bulk of their income from private sources.

There are worries over the control test, given that government legislation has placed strict controls over how many staff a university may employ and their salary scales. These controls tightened during the economic downturn.

Even if the CSO recommends that universities pass both tests, there is no guarantee that Eurostat will share this view.

It was widely reported, for example, that the CSO pushed for Irish Water to be listed as an off-balance sheet entity – though Eurostat ended up forming a very different view.

These issues are not a direct concern for institutes of technology. They are classified as on-balance sheet institutions and are prohibited from borrowing.

That is why the Government announced an investment of €200 million in 11 institutes of technology last month, aimed at creating an additional 8,000 third-level places.

But it is a real issue for the Government – and universities.

While universities are able to access low-cost borrowing from the EIB, it is doubtful if they could still do so on this scale if they were classified as on the State’s balance sheet.

The bank is expected to provide €110 million to support consolidation of the Dublin Institute of Technology campus at Grangegorman in the coming months, and is currently examining additional financing for investment at other third-level institutions in Ireland.

A decision is likely before the end of this year. The third-level sector, and the Government, now have anxious wait to see if their expansion plans remain on track.