Mary Mitchell O’Connor hits out at ‘sexism’ among male TDs 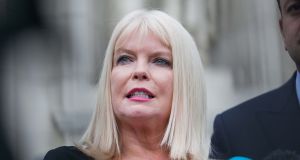 Mary Mitchell O’Connor: “I want to be able to stand in front of young women starting college and say that there is no gender inequality in the institution you are going to join for the next three or four years”

Minister of State Mary Mitchell O’Connor has hit out at a culture of sexism and macho behaviour among male Deputies in the Oireachtas.

She said there were days when she felt ashamed to be a public representative, especially when schools visited the Dáil chamber.

“The interactions in Dáil Éireann can be very macho. I really don’t like it. I think you can get your job done nice and quietly, get your targets, do what you need to do, without shouting and roaring,” she told The Irish Times.

“I don’t think the public like it. It’s certainly not a message that I would like to be sending to our children. There are days when I am ashamed of my life in there. Up in the gallery you see children in on a school tour looking down on this kind of behaviour.”

While allegations of sexual harassment have convulsed the Houses of Parliament in Westminster, she said she was not aware of similar allegations in the Oireachtas. However, Ms Mitchell O’Connor – who has responsibility for higher education – said sexism and gender inequality were very real issues within public life and in higher education institutions.

“We need to send out the message loud and clear that this is no longer acceptable. I want to be able to stand in front of young women starting college and say that there is no gender inequality in the institution you are going to join for the next three or four years.”

She said sexism was a contributory factor in why women were less likely to enter politics. “It could be a factor that some women don’t want to be in politics for that: you really need a hard, tough neck, and yet it’s really important as a politician and a woman that you still have to be empathetic.

“I dislike cynicism. Your core has to be authentic. You have to look at it and do the right thing, whether that is politically expedient or not.”

Ms Mitchell O’Connor is set to launch a new gender taskforce on Monday aimed at overseeing recruitment and promotion policies in higher education.

The five-person panel will be chaired by Marie O ‘Connor, a financial services partner at PwC who has championed the case of women in business.

Other members include Dr Patricia Mulcahy, president of IT Carlow, Sheila Nunan, general secretary of the INTO, Prof Philip Nolan, president of Maynooth University, and Ryan Shanks, head of strategy practice at Accenture Ireland.

Latest figures show women are hugely underrepresented in the senior ranks of most of the State’s colleges and universities.

While just over half of all lecturers in universities are female, these numbers fall dramatically at higher grades such as associate professor (29 per cent) and professor (21 per cent).

There has never been a female president since the establishment of the first Irish university some 425 years ago.

There is a similar gender gap in the 14 publicly-funded institutes of technology, though a small number are headed by women.

Under new measures third-level institutions risk losing out on research funding if they do not meet diversity thresholds. They also face the likelihood of having funding withheld if they fail to introduce mandatory gender quotas to increase the number of women in senior positions.

The moves have been welcomed by Irish Federation of University Teachers, which says it will supports any moves to tackle the gender imbalance at third-level.

When asked if similar measures were needed at Cabinet level, Ms Mitchell O’Connor said she expected the number of women in ministerial positions would increase in line with Dáil gender quotas. “It will change that culture with a critical mass of women – when we have that it will flow to the very top.”

When asked if losing her senior ministerial position in the recent Cabinet reshuffle was a blow to gender equality, she said: “The budget in my previous ministry was €850 million. In higher education it is €1.6 billion.

“I’m not hung up on job specifications. I am a Super-Junior Minister, I work well with Richard Bruton, and I am in charge of higher education and delivering those policies to ensure our student cohort gets the best education.”