Katie Ascough: some wanted to remove me from start

Students at University College Dublin voted to impeach their students’ union president Katie Ascough after she blocked the publication of information on abortion in a college magazine. 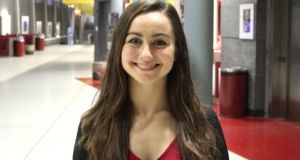 Former UCD Students’ Union president Katie Ascough, who was impeached from office by students on Thursday night, has said some students were looking to remove her from office from the day she was elected.

“I was elected on March 9th this year and some immediately called for my impeachment. It was flagged from day one that this might happen,” she said.

“From day one I said I would be a president for everyone, respecting the diversity of views in UCD,” she said on Friday morning.

Ms Ascough said she ran in the Students’ Union election on a range of issues including accommodation and mental health. She was speaking during an interview on the Pat Kenny radio show on Newstalk.

A total of 4,540 students voted to impeach Ms Ascough, out of 6,572 students who voted. The turnout was the highest in the Students’ Union’s recent history. Some 2,032 students voted against Ms Ascough’s removal as head of the union.

When asked about her anti-abortion views she said that when she was 15 years old her mother had a miscarriage and she had held the 13-week-old foetus. “That made a big difference to me. It opened my eyes. I felt compelled to protect all life,” she said.

Ms Ascough said she knew she would delegate some projects due to her personal beliefs upon taking up the role as president, such as the union’s involvement in the campaign to repeal the Eighth Amendment of the Constitution that gives equal rights to the unborn child and the mother.

In a campus referendum last November, 64 per cent of students voted to renew the union’s pro-choice mandate. Ms Ascough was a leading campaigner opposing the pro-choice position in the campus vote, instead advocating for the Students’ Union to adopt a neutral position on the campaign around the Eighth Amendment.

The campaign to impeach Ms Ascough began after she removed a page on access to abortion information from the student union’s Winging It freshers’ magazine, following legal advice that it may have been illegal.

Speaking this morning Ms Ascough said it was not fair to be pressured to break the law. She added that if the legal advice she received had said there was not a risk of a criminal conviction then she would have accepted the inclusion of abortion information in the student handbook.

“Once the legal issue came up, as the CEO of the company, I was responsible. The other sabbatical officers did not agree with me … I never promised to break the law or risk a criminal record,” she said.

“Put yourself in my shoes. I accepted the information put in front of me. If I was told that there was no risk of criminal conviction, that I wasn’t putting future jobs at risk, it probably wouldn’t have been an issue. I followed the advice put in front of me,” she said.

She maintained that the Students’ Union constitution states that a person cannot be mandated to break the law. “I was not confident putting advice in the book that was not legal. We couldn’t put abortion information in the book, but if asked we could give it.”

“It’s my Student’s Union as well, everybody should be entitled to run for president. I had hoped that the students wouldn’t expect me to leave my beliefs at the door,” she said.

UCD Students’ Union will hold a by-election in the next number of weeks to fill the vacant position. When asked if she would run again, she said “it’s not beyond the bounds of possibility” but did not think it likely.

“University should be a place for freedom of speech and thought, that should be nurtured. The referendum shows a lack of respect for people who respect the law,” Ms Ascough said.