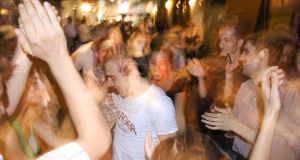 Many at third-level have only ever attended single-sex schools, and the sudden availability of legal alcohol, sex, student politics and freedom can be an intoxicating mix that leads to trouble. Photo: iStock

“You’re not in school anymore, we don’t hold your hand. If you don’t hand in your assignments or show up for lectures, there’s no detention. Nobody is going to call your mammy.”

These are the annual words of one UCD lecturer to his first-year students. For most young people, college is welcome relief from a lifetime of being told what to do.

Many have only ever attended single-sex schools, and the sudden availability of legal alcohol, sex, student politics and freedom can be an intoxicating mix that leads to trouble.

Bullying and harassment, particularly sexual harassment, can become problems for students and, indeed, for staff. Social media can make it worse (see panel).

Irish universities all have a discipline code that students are asked to read within their first few weeks.

These codes, which staff are also expected to abide by, cover sexual harassment, physical violence, bullying, cheating or plagiarism, smoking indoors and much more. In extreme cases, students can be expelled for breaching the rules.

The number of students who face disciplinary action for getting out of hand appears to be relatively small, but the vast majority are male.

Between 2012 and 2016, the University of Limerick dealt with 29 cases of bullying and harassment involving 44 students.

Twenty-three of these complaints were made by women and six were made by men. Of the accused, 35 were men and just nine were women.

At Trinity College, there were at least nine cases of students being harassed between 2012 and 2015; most of the victims were female and most of almost all of the harassers were male.

At NUI Galway, gardaí were called to the campus seven times between 2014 and early 2017 after student drinking got out of hand; there were six male students and two female students involved in the incidents.

Records released under the Freedom of Information act show that, between 2011 and 2014, 10 students at UCD faced preliminary hearings for breaches of student discipline and two were referred to a discipline committee. They were all male.

In 2012, three UCD students were given warning letters and fines when they threw eggs at then taoiseach Enda Kenny, who was opening the university’s new student centre. The students, who said they were protesting against third-level fees, were cautioned by the Garda Síochána.

Two of the more serious disciplinary breaches at UCD also occurred in 2014. First, a male UCD student was caught trespassing in the on-campus accommodation and in possession of another student’s card; later, he was “involved in an altercation with security staff”. He was reprimanded, ordered to write a letter of apology, and fined more than €1,000 – most of which was suspended.

The second report, as recorded by college authorities, is somewhat vague. Three male students from the university’s school of agriculture and food science were accused of “obstruction or harassment, including bullying” of another student.

Siona Cahill, vice-president for equality and citizenship with the Union of Students in Ireland and a former welfare officer at Maynooth University students’ union, says bullying and harassment are not especially prevalent on college campuses compared to workplaces, but that they can be harder to escape.

“You can leave the workplace and go home, but in college you’re in the classroom, library and bar as well as on various social media platforms. Your personal and professional lives can be harder to separate.

“The transition to third-level can also be quite extreme: your learning is self-directed and it isn’t always entirely clear who is in authority if things go wrong.”

Cahill believes the paucity and poor quality of sex education in secondary schools is causing serious problems when it comes to harassment and abuse.

“We don’t provide young people with education and resources around issues like sexual health and consent.

“This comes up continually and it is not changing. Colleges and students’ unions are highlighting the issue and running campaigns around consent – aimed at both men and women – but it’s not acceptable that young people arrive in third-level without any awareness of sexual health, bodily autonomy or boundaries.

“Welfare officers are becoming the frontline in sex and relationship education because the education system itself has let them down. I’ve seen a significant amount of students present with issues around sexual harassment, sometimes from other students and often after nights out.

“The majority were girls who were harassed by boys or put in difficult positions by friends, although drink wasn’t always involved.”

Helen Vaughan is a psychotherapist and owner of Maynooth Counselling and Psychotherapy.

“I see people of all ages in my practice. This includes adolescents and some people in their 20s, but I don’t see a huge difference between the two: they’re all young people trying to figure out who they are.

“The transition between school and college is huge, moving from structure and rules to a place where you really have to make your own friends and take responsibility for yourself.

“There’s a huge amount of freedom but young people don’t always have the personal skills to deal with that level of freedom. Boundaries can be pushed but some people don’t know where they end. Colleges are proactive in helping them but the work should be starting sooner.”

A lecturer’s story: “I was publicly bullied and humiliated by my students.”

I’ve been teaching for about 25 years and, until a few years back, I loved it.

But then over 20 of my students launched an online petition against me and my ability to teach a particular module. I was gutted. I didn’t understand why they hadn’t raised their concerns with me.

The college called in the students who had signed it and told them to take their name off, but the damage was done. I had to keep teaching and grading these students for the remainder of the course; it was very difficult.

I tried to put it behind me but it transpired that there were still students who had not removed their name from the petition. I kept raising it at exam boards, but didn’t feel that any of my colleagues had my back, and there was no real sanction for the students. It felt like all my hard work and input into college life and committees counted for nothing. I didn’t want the students hung, drawn and quartered or stop them graduating; I just wanted to be treated with decency.

In one class, we were having a discussion about a lack of resources, one of these students said to me, “Should we start a petition?” That was really upsetting. The college recommended that I go for counselling, which I did.

Reading this, I know what many people will think: well, maybe he is a terrible lecturer. But, while I always encouraged student feedback and lecturer accountability, this public humiliation was not the way to do it.

We don’t do the students any favours by sending them to the jobs market thinking it is okay to behave like this. * The individual has requested to remain anonymous