Youth offenders could face harsher sanctions depending on age 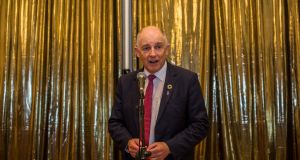 Minister of State at the Department of Justice David Stanton TD was today due to publish a draft Youth Justice Strategy for the period to 2026. Photograph: James Forde

Youth offenders who commit the same crimes as each other could be treated differently under the justice system, with juveniles closer to adult age (18 yearsold) offered fewer supports and given tougher sanctions than younger juvenile criminals.

The move is under consideration as part of the process to formulate the Government’s new Youth Justice Strategy 2020-2026.

Respondents to a round of public consultation to begin online today will be asked if sanctions for older youth offenders should increased and supports decreased compared to younger youth offenders who commit the same crimes.

Furthermore, the public will be asked if the “maturity” levels of a youth offender should dictate the severity of the punishments they face for crimes and the extent of the supports they enjoy from the State aimed at diverting them away from crime.

However, some supports extended to youth offenders may also be made available to criminals up to 24 years. This is on the basis that some people’s formative years continue until that point in their lives.

At present the age of criminal responsibility in the Republic is 12 years. However, when younger children commit very serious crimes – including murder, manslaughter and other serious sexual crimes – they can be tried, as adults are, in the Central Criminal Court.

One of the models examined by the Irish Government is that of Luxembourg, where people cannot be charged with a criminal offence unless they are at least 18 years.

Instead juveniles can be ordered to undergo special education programmes, they can be placed in special institutions or be allowed to live at home but under surveillance or monitoring.

Minister of State at the Department of Justice David Stanton is today due to publish a draft youth justice strategy for the period to 2026.

It seeks to end the over-dependence on the Garda Youth Diversion programme in dealing with child offenders.

Under the new draft strategy the Garda diversion programme would be rebranded and called Special Youth Projects. Research has shown the word “Garda” in the title stigmatises the programme.

The Garda would continue to have central involvement in the new Special Youth Projects, which would also be linked to community and youth groups, sports clubs and schools. This, it is intended, will enable the Garda support schools and other groups in dealing with very difficult or at-risk children.

Interventions could be made in the lives of those children at a much earlier age, including under the age of 12 years, and their families would be reached and supported as part of the process.

Under the current system significant interventions occur only after juveniles commit offences and come to the attention of the Garda Youth Diversion programme.

The draft strategy also states the Children’s Court, reserved for juveniles, should be able to hear the cases of young adults, 18 years or older, who were juveniles when they committed their crimes.