Covid-19: 70 complaints to Gsoc about enforcement of regulations 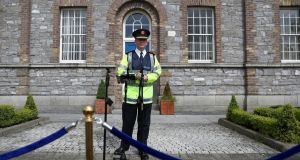 The Garda Ombudsman (Gsoc) has received more than 70 complaints from the public relating to Garda enforcement of the Covid-19 movement restrictions.

Gsoc said it is passing anonymised versions of the complaints over to Garda management to assist them “in identifying issues which may be emerging in the enforcement of the restrictions.”

Many of the complaints have not yet been assessed to see if they meet the threshold for a full investigation, it said.

One in three of the complaints, about 23, alleged gardaí were not observing social distancing at checkpoints or were not using gloves or masks. Masks are typically not used by gardaí on Covid-19 checkpoints but many members wear gloves.

Gsoc said some complaints related to incidents where gardaí were “rude or abrupt at a checkpoint”. Other people complained that gardaí instructed them to return home after the person said they were going further than 2km to do their shopping. The 2km limit applies only to exercise and not essential journeys such as food shopping.

“The Ombudsman Commission believes that sharing anonymised details in this way in real time will alert the Garda Síochána to concerns emerging from the public and allow Garda management address issues as they arise,” a Gsoc spokeswoman said.

Garda enforcement of the Covid-19 movement restrictions has been ongoing since April 8th. Since Tuesday the force has been engaged in the second stage of Operation Fanacht, a high-visibility policing operation which will see 2,500 garda on the roads at any one time over the long weekend.

Garda Commissioner Drew Harris appeared before the Policing Authority on Wednesday where he answered questions about reports that gardaí were checking people’s shopping bags and that armed officers were being deployed at checkpoints.

Mr Harris said he had not received reports of gardaí checking people’s shopping and said members have no right to do so. However he said armed gardaí will continue to be used at checkpoints due to extreme pressure on manpower resources.

As of last Sunday gardaí had arrested 76 people under the emergency Covid-19 legislation and another 760 people under traditional legislation “where other offences were highlighted in the course of COVID-19 operations,” it said.

It has deployed spit-hoods, wire and mesh devices which are placed over suspects heads to stop them spitting or coughing, on 15 occasions. Mr Harris said the hoods are being used sparingly and only until the pandemic has passed.

Between April 8th and 25th there were 31 incidents of people spitting or coughing on gardaí.