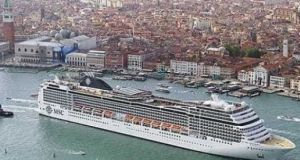 The cruise ship MSC ‘Magnifica’ on which Dublin-based German Daniel Belling, who is accused of killing his wife, was travelling. Photograph: MSC Cruises

A cruise ship waitress told police in the case of the Dublin-based German man accused of his wife’s murder, the last time she last her was on the second night of the couple’s cruise, court documents show.

The arrest was based on the consideration that she was not registered as having got off the boat, not only on its return to Civitavecchia on February 20th but also at any moment during the 10-day cruise, a court document shows.

The judicial ordinanza document, the court ruling which confirmed Mr Belling’s arrest, points to the evidence of two of the ship’s crew, a restaurant waitress and a cabin maid.

Ms Li, boarded the MSC Magnifica in Civitavecchia, north of Rome, on February 9th, along with Mr Belling and their two young boys.

Preliminary hearing judge Maria Paola Tomaselli, rejected the evidence of Mr Belling (44) who told the court last week that his wife had got off the ship in the Greek port of Kalikon of her own volition.

The waitress told police that the last time she had seen Ms Li had been on the evening of February 10th when she, her husband and their children had dined together at their assigned table, No 704. in the Four Winds restaurant.

When she did not see Ms Li either at breakfast or lunch next day, she presumed that the woman had eaten at the ship’s buffet. She also told investigators that for the rest of the trip, Mr Belling and his two sons had eaten on their own, without Ms Li.

A cabin maid told police that she had not seen Ms Li after February 9th, adding that Mr Belling on the fourth day of the cruise had told her not to make up the sofa as a bed since only three people, not four, were sleeping in the cabin.

The details are contained in the court’s ordinanza which is the ruling of the preliminary court judge who is asked to confirm an arrest or to set the detained person free. This judge takes no further part in the judicial process which continues on it way under the public prosecutor’s office.

The court document raises doubts that Ms Li could have got off the boat without her disembarking having been registered by electronic surveillance on the boat.

The court document also points out that when Mr Belling was asked to explain his wife’s disappearance, he at first claimed that she had got off the boat for “urgent business” reasons and then, in a second moment, he availed of his right not to answer questions.

The court document also considers it is strange that Ms Li did not take all of her belongings with her if and when she got off the ship, pointing out that she left her credit card, her mobile phone and her wallet on the ship.

Asked about his relationship with his wife, Mr Belling admitted in court last week that it was marked by “tensions”.

The court’s ordinanza concludes by pointing out that the couple’s relationship was anything but “serene and idyllic”.

Furthermore, the judge asks, given their apparently restricted economic circumstances, what were the couple doing on a Mediterranean cruise?

In the end, the judge concluded that Mr Belling’s behaviour, his failure to report the disappearance of his wife, was reason enough to convalidate his arrest.

In court, Mr Belling had said that on the night the ship sailed from La Valletta in Malta to Katakolon in Greece, his wife had told him that she was tired of the cruise, that she was not enjoying it and that she wanted to get off.

When the ship stopped at Katakolon, she had chosen to remain on board while her husband had got off with their two children for a day of sightseeing.

When he returned to the ship with the children that evening, he found that his wife had left, taking her own clothes and luggage with her.

Mr Belling told the court that he had not immediately reported her as missing because in the past she had behaved similarly, walking off during a family holiday.

The judge also said , given that Mr Belling had been arrested at Rome’s Ciampino airport just before boarding a flight to Dublin with his two boys, there was a very real possibility that, if released, he would attempt to leave Italy.

The Irish embassy in Rome confirmed that, thus far, there has been no request from Italian authorities to help out with the Belling children, currently housed in a state institution.