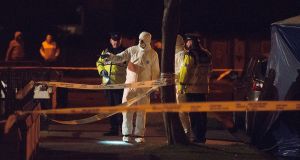 Members of the Garda Forensic Unit on Thursday night at the scene of the shooting on St Ronan’s Drive in Ronanstown, west Dublin. Photograph: Dave Meehan

Witnesses at the scene of the Ronanstown shooting described how the partner of the man who was shot and fatally wounded screamed out after he was approached by a gunman.

In the St Ronan’s Drive housing estate in west Dublin, residents gathered around a large Garda cordon that encircled two short rows of houses backing on to a green area.

An immediate and heavy Garda presence was at the scene which appeared to centre around a black car parked in a driveway, still with its lights turned on.

One man described how he got a call from a relative who lived nearby and who had heard a woman, the dead man’s partner, cry out close to the car in the immediate aftermath of the shooting.

“It was scary after it happened. She heard her screaming; she thought he was after having a heart attack,” the man said.

“I went out to see what was going on. I knew something was wrong. I saw the police were already there.”

The scene that met him in the driveway, he said, was of the victim slumped over into the passenger seat of the car.

“I don’t know what to think, it’s not a nice thing to happen. I knew the man to see, to say hello. They are lovely people.”

Other neighbours said the woman had lived in the area for years and was well regarded.

There was a mixed reaction from those gathering on a freezing evening – a mix of reluctance to talk, shock, outrage and incredulity. The brutal crime scene stood in stark contrast to the homes of families draped in flicking Christmas lights.

A man who was standing with his son outside the police tape was mystified by the increasing level of gangland crime in the city.

“It’s stone mad. Two days before Christmas someone gets plugged,” he said. His son looked on as the Garda forensic team arrived and uniformed gardaí moved the cordon back to take over a widening portion of the surrounding road, quickly attracting more local observers.

At about 7pm, some two hours after the shooting occurred, they unfurled a large blue tent and carried it over to the driveway where they hoisted it over the back of the black car. There was no sign of anybody in the houses immediately surrounding the scene.

“It’s got to be a joke at this stage,” the father continued. The shooting is made all the more outrageous for locals by the fact it occurred not far from Ronanstown Garda station.

“Life isn’t even worth a packet of f***ing crisps is it?”

Another woman who hasn’t lived in the area for long said the first she heard about it was when she was sitting in her living room watching the RTÉ news. She told her son to go back inside, as he peered out at the expanding Garda response yards away.

“I was sitting there looking at the news. I didn’t even hear gunshots.”

Further down the road, two more neighbours had just arrived home. They were curious about what happened but didn’t seem too surprised. The man mentioned two other shootings that had happened not far away a couple of years ago.

“A friend of ours rang me and said, ‘Did you hear the news?’ I said no, we were in town getting presents and I checked breaking news and there it was,” he said.

They didn’t know what had happened but said shootings seemed to be “just tit for tat”.

“It’s sad. It is sad but we keep ourselves to ourselves.”

“It’s not where you live, it’s how you live,” his partner added.