Car set on fire in Dublin with owner inside 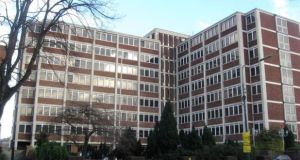 A car was set on fire in south Dublin late on Wednesday night while the owner of the vehicle was inside it.

Gardaí are investigating whether the victim was asleep at the time.

The man is currently working in Dublin but gardaí believe he had been sleeping in his vehicle for “at least a few days”.

The case is likely to once again ignite the debate on the shortage of affordable rental accommodation, even for people in employment.

The man, aged 46 years and believed to be from Germany, was in his car outside the Hume House office block on Pembroke Road, Ballsbridge in Dublin 4, when his vehicle was set on fire at about 11.15pm.

He managed to escape from inside the car and the emergency services were called to the scene.

The victim was taken to St Vincent’s Hospital in Dublin and is undergoing treatment for burns, though his injuries are not life-threatening.

And while he spent the night in hospital, that was a precautionary measures as his injuries were described as “relatively minor”.

The Garda has confirmed it is now investigating a case of suspected criminal damage. No arrests have been made and the investigation is ongoing.

The victim has already been spoken to several times and his family have been contacted.

Gardaí are hopeful he may be able to outline how his car went on fire.