Man hospitalised after being found wounded near Christmas market in Belfast 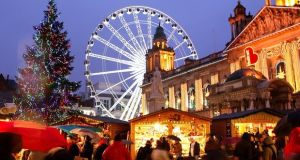 Police are no longer treating an incident that led to the evacuation of a Belfast Christmas market as a suspected crime.

The crowded market in the grounds of City Hall was cleared on Wednesday night when a man was found with a wound at the front gate, amid fears he had been stabbed.

The man is in a stable condition in hospital.

The PSNI said it does not believe the injured man was the victim of an attack.

Det Insp Paul Rowland said: “Whilst police are at the early stages of the investigation, police do not believe at this time that any other person has been involved in this incident.”

The Christmas market opened again on Thursday — its last day of business.

A spokeswoman for the popular attraction said an emergency plan triggered after the incident worked very well.

Gabriel Scally warns against ‘rush’ to relax Covid-19 restrictions 13:30
Men released without charge after questioning about raid on bookmakers 13:19
Over 300 church groups unite for online Irish Blessing video 11:52
Contact tracing could be in place in North for two years, says Foster 11:51
‘I have no faith in the Catholic Church but I prayed when I’d Covid-19’ 11:30