Vessel was not suitable for the conditions of the voyage on the day, coroner’s court told 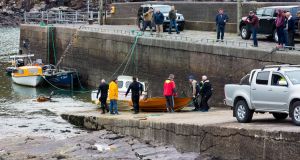 The remains of the boat that sank with the loss of three lives being brought ashore at Coonanna Harbour, Cahersiveen. Photograph: Alan Landers

Two of three men who drowned on a sea fishing trip in south Kerry a year ago had high levels of alcohol in their system, the inquest into their death in Killarney has heard. The third man had told his wife he was returning to shore because of the waves, but she never heard from him again.

A verdict of accidental death has been recorded at the inquest in Killarney, into the deaths of three men who died at Coonanna harbour near Cahersiveen in September 2018.

At the end, coroner Aisling Quilter referred to an investigation by the Marine Casualty Investigation Board (MCIB) into the deaths of Anatolijs Teivans (58), of Brendan’s Terrace, Killarney; Jurijs Burcevs (30) of The Courtyard, Killarney and Valerijs Klimentjevs (38), of the Parklands Apartments, Tralee.

The vessel was not suitable for the conditions of the voyage on the day. It was swamped by a wave washing over the transom of the heavily laden boat.

The fatalities resulted from a prolonged period in cold water as there was no means of indicating distress.

Buoyancy aids are suitable when people are lifted quickly from the water and the MCIB recommended personal flotation aids were recommended for long periods in the water, the coroner noted.

The coroner also referred to “medical evidence” that Mr Teivans and Mr Burcevs had high levels of alcohol in their system. Mr Teivans’s blood alcohol level had been 145 and Mr Burcevs was 191 per cent.

The high consumption of alcohol would have impaired their performance in addressing the emergency, she said.

The pathologist, Dr Margot Bolster had found the cause of death in all three to be the same: death was due to acute cardiorespiratory failure due to drowning on September 30th, 2018.

Earlier, Inga Peremitna, the wife of Valerijs Klimentjevs, in her deposition, told the inquest at Killarney Coroner’s Court that her husband had left home in Tralee at 6 am. At 11 am they had a brief conversation by phone in which he said he intended to return to shore because of the waves.

“The conversation was short, which I thought was strange,” Supt Flor Murphy read.

She rang his phone again at 2.30pm and got no reply. Gardaí came to her home in Tralee at 8.30pm and requested her to go to the morgue to identify the body.

It was her husband’s first time fishing in that harbour and in that boat, although he fished regularly in Dingle, she replied to the coroner with the aid of an interpreter

Local man Michael O’Sullivan saw the three set out to sea at 8.30am.

“Conditions were not favourable for that size boat. The water was choppy,” he said in his deposition. It was in his head all that day.

At 5.30pm he returned to the harbour and spoke with his brother John who was fishing off the pier at Coonanna. When he left, John phoned to say he saw a boat upturned in the water.

They saw a body floating at the back of the pier .

He told the coroner the weather conditions had become worse during the day, he said.

Witness Ernie McGrath told how Anatolijs Teivans kept his boat in his father’s property, and went fishing every weekend. The boat was sea worthy, but not fit for purpose, Mr McGrath said.

“It was a constant source of trouble for him,” Mr McGrath said of boat which he said was around 19ft and a speed boat, not a fishing boat. The 70hp upper engine was always giving trouble, he said.

He and Michael O’Sullivan walked along the cliffs and saw the other two bodies floating away from the boat in a southerly direction. They kept an eye on the bodies while alerting the Valentia coastguard. All three bodies were removed by helicopter from the water.

The boat was stuck in rocks, bow down and upturned.