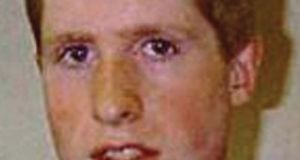 The food delivery company Deliveroo is to feature the face of missing person Trevor Deely on its bags, according to his sister ahead of the 19th anniversary of the young man’s disappearance.

Mr Deely was last seen on December 8th, 2000 as he walked home from his office Christmas party to his apartment in Ballsbridge, Dublin. The last-known CCTV images of him show him walking across Baggot Street Bridge towards Haddington Road at 4.14am. He was 22 at the time.

Renewing an appeal for any information on her brother’s disappearance, Michele Deely said his photograph will be displayed on the large backpacks carried by Deliveroo’s riders.

Ms Deely said the move is part of a campaign which will begin on December 4th, National Missing Persons day. Her brother will be one of several missing persons featured in the campaign, she said.

“It’s kind of like the milk carton campaigns of old,” she said, referring to the now defunct US practice of displaying missing children’s photographs on milk cartons.

Trevor’s photo was displayed on milk cartons in the UK shortly after he went missing in 2000, Ms Deely said.

A spokesman for the food delivery service declined to confirm the move this week or provide further details. It is understood planning for the campaign is in an early stage and consultations are still ongoing with an Irish missing persons support group. Deliveroo launched a similar missing persons campaign in four UK cities last year.

The Deely family met officials from Forensic Science Ireland (FSI) earlier this year, who told them there is no chance that any of the unidentified remains currently being held belong to Trevor.

Ms Deely said FSI has also liaised with UK authorities who said DNA checks showed none of the unidentified remains which have washed up in England or Wales belong to her brother.

“It was helpful in the sense that it was conclusive but unhelpful in that it is another avenue which is now closed.”

A review of Trevor’s disappearance concluded earlier in 2018 without producing any new leads.

The cold-case review was unconnected to the search of a 12-acre site in west Dublin in 2017 for Trevor’s remains. The search did not produce any leads.

Ms Deely said very few fresh leads are now coming in on Trevor’s disappearance. Gardaí plan to speak with one person this week who said they may know something, she said.

The garda approach to the case is now reactive rather than proactive, Ms Deely said. “It’s back in a box on a shelf.”

However she said the family continues to have an excellent relationship with their garda liaison officer.

“As a family we’re still stuck. It’s very hard to know what to do next,” she said.

Ms Deely said there is still a €100,000 reward for information leading to the location of her brother. Certain people in the CCTV footage from the night of Trevor’s disappearance have still to come forward including a man observed walking behind him on the road.

She said her parents “will never, ever, until the day they die, lose hope” about finding Trevor. “Myself and my siblings are possibly more realistic but that doesn’t mean we have lost hope about finding him and understanding what happened.”

Anyone with information on Trevor’s disappearance can contact the Crimestoppers anonymously on 1800-250025.