Junction changed to make it safer after death of boy, inquest told 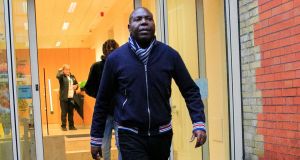 Eric Paulo Caputo, father of Elrich Caputo, at the coroner’s court inquest into the death of his son. Photograph: Gareth Chaney/Collins 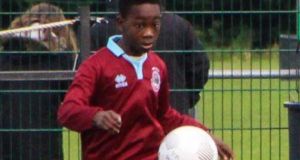 Elrich Caputo loved his football. He loved training and playing with his friends. He was totally dedicated to it, his father said. Photograph: Gareth Chaney/Collins

A schoolboy who died after he was hit by a truck was taking a shortcut across a “convoluted” junction when he was struck.

Elrich Caputo celebrated his 11th birthday with a party the day before and his mother asked him not to play a match on October 16th, 2016, because he was tired.

He stepped out into the path of an oncoming truck without looking, an inquest into his death heard.

“He loved his football. He loved training and playing with his friends. He was totally dedicated to it,” the boy’s father Eric Paulo Caputo said, speaking after the inquest.

Elrich, who played both soccer and Gaelic football, had been out with friends and family the day before, his mother Luciano Caputo said.

“He had just turned 11 on October 13th, we’d been out celebrating,” Mrs Caputo said in her deposition.

“I asked him not to go to football that day because he was tired after his birthday but I believe he sneaked out of the house without me knowing,” she said.

Elrich was crossing at a junction on the N51 at Abbeylands in Navan, Co Meath when he was struck.

He was taking a shortcut across the junction instead of following the pedestrian route, which required him to cross 12 lanes of traffic. The pedestrian route has since been shortened, Dublin Coroner’s Court heard.

“The pedestrian crossing at the time was quite convoluted,” Coroner Dr Myra Cullinane said.

“He was crossing and he reached the island, then proceeded out onto the road without looking,” Mr Cosgrave said.

Driver Derek O’Donnell had been driving through the night delivering milk.

“I saw a young lad, his head was turned as if he was talking to someone behind him,” Mr O’Donnell said. He beeped the horn but Elrich stepped out and was struck.

Passers-by rushed to help. Elrich was breathing but unresponsive. He died at Temple Street Children’s Hospital on October 23rd, 2016.

The cause of death was severe head injuries.

The inquest heard the truck driver was travelling at 75km/h in a 50km/h zone when the accident happened.

“He wouldn’t have been there had he been travelling at 50km/h,” barrister for the family, Siobhan Kelly said.

Garda Phillip Nolan said Elrich took the shortest route through the junction instead of following the pedestrian route.

“Speed was not a causative factor,” Garda Nolan said.

A file was prepared for the Director of Public Prosecution but no charges were brought.

“The layout has now changed in order that it be safer for pedestrians and there be no temptation to take the shortest route as Elrich did that morning,” Dr Cullinane said.