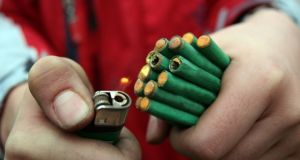 The Garda, fire services and medical professionals warn annually about the risk of serious injuries from the use fireworks around Halloween. File photograph: iStock

Two teenagers have been treated in hospital after suffering serious injuries when a firework exploded in their hands on Faussagh Avenue, Cabra, on Friday night.

One of the boys, aged 15 and 17, suffered an eye injury, while the other has “a severely deformed hand” after the incident, according to Dublin Fire Brigade, who gave paramedic care at the scene.

The two were taken to the Mater Hospital, Dublin and the Children’s University Hospital at Temple Street for treatment.

Warning people to take care, the Garda said: “Each year many children and young people suffer terrible injuries caused by fireworks, including burns, loss of limbs and serious eye injuries.

Fireworks, bar the smallest types, are to be confiscated if found by gardaí, while people who throw any ignited fireworks in public places can face up to five years in jail, plus fines.

Urging parents to talk to their children about the dangers fireworks pose, Dublin Fire Brigade said: “[They] are sold on the black market with no recognised safety tests.”

The number of incidents involving fireworks is higher than last year, even though there are still six weeks to go before the traditional Halloween celebrations.

Already, gardaí have issued warnings on foot of reports that children are throwing fireworks on the street, with particular complaints being heard about Pearse Street in Dublin city centre.