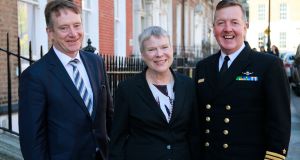 Foreign fighters and so-called Isis brides should face the full but fair rigours of the law when seeking to return to their countries of origin, the deputy secretary general of Nato has said.

Rose Gottemoeller, who was speaking to The Irish Times during a visit to Dublin, did not reference any individual case and stressed that it was for countries to to deal with their own cases.

She was responding to a question about foreign fighters and women who had married Isis fighters in countries like Iraq and Syria, such as Irish woman Lisa Smith, who remains in Syria.

“It’s a difficult issue and Nato doesn’t, as Nato, contend with it,” Ms Gottemoeller said of returning fighters and women who had been Isis brides.

“It’s Nato member states and partner states who must contend with it here in Europe, ” she said. “I will say that the rule of law means a lot to Nato members across the board. The Washington Treaty [on which Nato is founded] in its language underscores that Nato members must, must promulgate, implement, the rule of law.

“I say when people have broken the law they need to stand responsible for that break. They should have fair treatment in a process, a judicial process, investigatory process. But it’s up to the individual state to decide just how that process unfolds.”

Ms Gottemoeller was in Dublin to address the Institute of International and European Affairs on the United Nations Security Council Resolution 1325. The convention recognises the disproportionate impact of wars on woman and children and urges a special approach to them, including in the area of repatriation and resettlement.

Ms Smith, a former member of the Defence Forces, remains effectively stranded in Syria with her two-year-old daughter. Her husband and the father of her child was killed while fighting with Isis.

The 37-year-old, who travelled to join up with the Islamic State group, is in the Al-Hawl displacement camp in Syria for the wives and children of Islamic State fighters.

Efforts by the Government to return her home are continuing. She is expected to be questioned by the Garda about her time in Syria and allegations that she used her military training with the Army and Air Corps to train girls to fight.

During her address in Dublin, Ms Gottemoeller said she had met some of the women who were influential in the peace process and was pleased to acknowledge their role.

However, when asked about the political impasse in the North at a time when the main political leaders of parties like the DUP and Sinn Féin were women, she said she would not comment directly on the parties.

She said it was now much more routine to have women “at the top level” in politics and, like men, not all of them would get along.

“They’re not always going to agree, it’s not always going to be ‘the gals are getting together and having a great time and all work beautifully together’,” she said. “But I do think there is some facility among women leaders to look for facility, to come to agreement; the judicious comprise that suits the interests of both parties.”