Turkey to deport Lisa Smith and her daughter to Ireland 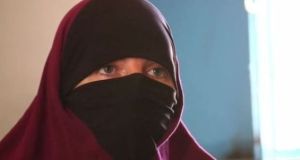 Lisa Smith left Ireland several years ago, travelling first to Tunisia and then to Syria where she joined up with Islamic State. File photograph: BBC/Screengrab

Irish Islamic State supporter Lisa Smith has been interrogated by Turkish security services and will be deported in the near future, according to Turkish officials.

The Department of Foreign Affairs have refused to comment on the announcement. A small team of Irish officials, supported by members of the Army Ranger Wing, have been in Turkey for several weeks negotiating the return of the Dundalk woman and her two year old daughter.

It is understood the process has been delayed by the insistence of the Turkish government that Ms Smith be interviewed by security officials about her activities with the terrorist group and about her detainment in refugee camps run by the Syrian Defence Forces following the collapse of the Islamic State’s so-called “caliphate”.

“Efforts to identify the nationalities of foreign fighters captured in Syria have been completed, with their interrogations 90 per cent finished and the relevant countries notified,” Interior Ministry spokesman Ismail Catakli told the Turkish State-run Anadolu news agency.

He said two Irish nationals who were captured in Syria will be deported in the coming week, along with nationals from several other European countries. Government and security sources have confirmed the Irish nationals are Ms Smith and her daughter.

The interior ministry said “legal proceedings”relating to the Irish nationals are “about to end.”

Turkey’s interior ministry declined to provide additional details on Monday but the legal proceedings are understood to be a reference to an evaluation by Turkish authorities to establish if Ms Smith committed any crimes against Turkey’s interests during her time with Islamic State.

Ms Smith (38), a former Irish Air Corps member who served on the Government jet, was in the Ain Issa displacement camp in north east Syria, along with other family members of Islamic State fighters, until it was bombed by Turkish warplanes in October. She fled north on foot until she was picked up by a Turkish-backed militia.

She is expected to be repatriated to Dublin from Ankara in the company of Irish officials. The Department of Foreign Affairs have already drafted travel documentation for Ms Smith and her daughter.

On her arrival in Ireland, Ms Smith is expected to be immediately questioned by gardaí from the Special Detective Unit specialising in foreign terror threats.

Gardaí say she is a “person of interest” and that an investigation into her activities has already begun. It is an offence under the Criminal Justice (Terrorist Offences) Act 2005 to engage in terrorist activity in or outside the state.

Turkey has promised to repatriate dozens of Islamic State supporters to their native countries, including in cases where those countries have refused to take them back.

On Monday three people, from America, Denmark and Germany were deported with about twenty more expected to follow in the coming days, including eleven people from France.

Ireland is unusual among western countries in that it has not resisted the repatriation of Ms Smith or attempted to strip her of citizenship. Turkey has criticised countries for refusing to repatriate citizens who left to join Islamic State in Syria and Iraq.

Its government claims it has captured 287 militants in north east Syria since Turkish forces invaded last month following the withdrawal of the US military from the area. It says it already holds hundred more Islamic State suspects, many of whom are from western Europe.