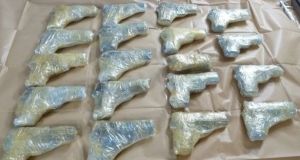 A handout photo made available by the British National Crime Agency showing guns recovered hidden in car after it arrived at the Port of Dover from Calais. Photograph: EPA

A man has been sentenced to nine years in prison for illegally smuggling 60 handguns into the UK.

Robert Keogh (37) was stopped at the Port of Dover on August 2nd and the weapons, all tightly wrapped in plastic, were found stashed in his Volkswagen Passat.

The 9mm self-loading pistols had been manufactured in Turkey and were found in the car alongside four magazines, latex gloves and Turkish paperwork.

According to the National Crime Agency (NCA), the stop was the biggest ever seizure of lethal barrel firearms coming into a UK port.

Keogh, from Dublin, was known to have gambling debts, Canterbury Crown Court heard.

He had entered the UK via Holyhead on July 24th and stopped off in Hackney, east London, before heading off on his trip.

The court heard that during the stopover in London, Keogh “thought he might be shot if he didn’t co-operate and feared for the safety of his family”.

Sentencing Keogh, Judge Rupert Lowe said: “One way or another, you decided to earn money by taking part in very high-risk gun smuggling.

“You were, in essence, a courier.”

He said the weapons were designed “for criminals to shoot and threaten people with”.

“Many people would have been threatened, and some shot, and perhaps some killed, by criminals using these illegal prohibited weapons,” he added.

Keogh, who stood in the dock wearing a cream jumper and black rimmed glasses, thanked the judge as he was sent down.

Speaking after the hearing, Martin Huxley, of the NCA, said: “This is clearly an organised crime network that’s been responsible for this importation of firearms into the UK.

“We’re extremely pleased and relieved that we’ve removed 60 firearms that would have potentially been on the streets of the United Kingdom.

“We know that criminals favour handguns because they’re easier to conceal on their person.”–PA