Two tourists faced a horrifying ordeal when they were robbed at gunpoint at around 6pm on October 21st at Long’s Place, Dublin, near the Guinness Storehouse. 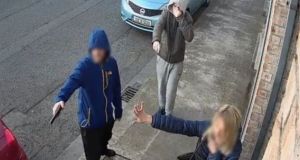 An Italian teacher who was mugged at gunpoint while accompanying a teenage student on a visit to Dublin’s Guinness Storehouse has thanked Ireland for its support and described it as a “wonderful country”.

On Monday, a thief pointed what appeared to be a gun at the group and stole the young student’s wallet. The incident was caught on CCTV footage.

Speaking to the Star newspaper, teacher Silvia Piantoni vowed to return to the country because “Ireland has shown its solidarity and support”.

“Despite the bad adventure, I would like to thank Irish police and Government for the support we received,” Ms Piantoni said. “In Italy, incidents like the one that happened near the Guinness Storehouse are quite common.

THANK YOU ALL for your kindness to this lovely Italian school group after their ordeal on Monday. Hope to see them back soon as our guests🇮🇹 pic.twitter.com/NtkSUMuLEz

“We have been informed the criminals have already been identified, therefore we are happy to have contributed to the safety of your country. We will come back soon, Ireland is a wonderful country!”

The father of the teenager caught up in the mugging told the same newspaper his son had always dreamed of coming to Ireland and that gun robbery did not put him off.

“He is already talking about going back to Ireland, and he would return tomorrow if he could,” he said.

“I want to thank the Irish people who showed my son and the rest of them so much kindness afterwards. A lot of people helped them.”

Brendan Griffin, the Minister of State with responsibility for tourism, accompanied the group to Dublin Airport on their way home.

In a tweet he said: “THANK YOU ALL for your kindness to this lovely Italian school group after their ordeal on Monday. Hope to see them back soon as our guests.”

Gardaí arrested a man in his 30s over the incident. He is expected to appear in court on Friday.