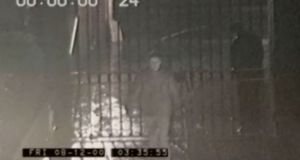 CCTV images of missing person Trevor Deely which appears to show him inside gates while being watched by a man with whom he had a brief conversation.

An anonymous donor has offered a reward of €100,000 for information relating to the disappearance of Trevor Deely.

Gardaí have initiated a “complete review” of the investigation into his disappearance after enhanced CCTV footage showed him in contact with a man who detectives believe was “acting suspiciously”.

Mr Deely was 22 when he went missing in the early hours of December 8th, 2000. Following a Christmas party, he called to his place of work, Bank of Ireland’s asset management offices on Wilton Terrace, Dublin 2, to collect an umbrella.

The enhanced footage captures a man dressed in black outside the rear entrance of the bank prior to Mr Deely arriving. The man appears at 2.59am and takes cover behind a pillar. He waits there for approximately 35 minutes.

At 3.34am, moments before Mr Deely approaches his place of work, the man steps out onto the footpath and follows Mr Deely to the back gate of the bank before conversing with him for a few moments.

Mr Deely then enters the offices, and has a coffee inside with a colleague. He emerges 37 minutes later with an umbrella. He leaves the umbrella against a wall, buttons up his coat, and begins walking towards Baggot St bridge.

Mr Deely was then captured on CCTV passing the Bank of Ireland ATM machine on Haddington Road at 4.14am. This is the last known sighting of him.

Gardaí are satisfied that a man seen following Mr Deely in this footage is the same man who appeared in the footage on Wilton Terrace.

Speaking at Harcourt Square on Friday, Detective Superintendent Peter O’Boyle said the man seen in the footage with Mr Deely is a person of interest in relation to the investigation.

“It’s a particularly bad night,” he said. “It’s raining. What explanation is there for him to be standing there?

“He doesn’t move until Trevor comes into shot, and then follows Trevor to the gate of the bank premises. After Trevor enters the bank, this man disappears from shot and we don’t know where he went to.

“This individual has never come forward. There have been numerous appeals over the years, and he has never done so.”

Mr Deely’s sister Michelle appealed for the man in the footage to come forward. “The reason we are here is to appeal to that person, or persons, who know what happened next,” she said.

“We have never believed that someone can vanish into thin air. We know someone knows something and we ask that you come forward to put an end to this relentless nightmare.”

Mr Deely is described as 6ft1ins in height and of slim build. He has short red/brown hair and fair complexion.

Supt O’Boyle said “follow up investigations” are being carried out on foot of the footage.

“We are placing particular emphasis on the new CCTV that captures a male who can only be described as acting suspiciously in the short period before Trevor enters the bank at 3.35am on December 8th, 2000,” he said.

“Our first appeal is for the male if he recognises himself to come forward and secondly for anyone else to come forward who may recognise him to notify us. We would be very anxious to speak to him.”

A newly established team of six officers in Pearse Street Garda station has been conducting a “cold case review” into the unsolved mystery for the past two months.