‘Generations passed through and graduated into Mountjoy,’ says artist and politician

Locked up in St Patrick’s on Dublin's North Circular Road from 1973 to 1976, artist and politician Mannix Flynn describes it as part of the “gulag of Irish institutions” that processed generations of Irish children. This week the prison closes its doors. 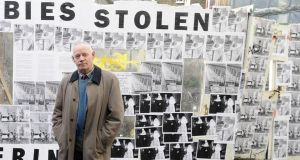 Mannix Flynn: “You can trace most of the adult criminals in Ireland at the moment into [these] institutions.” Photograph: Dave Meehan

Locked up in St Patrick’s from 1973 to 1976, the artist and politician Mannix Flynn describes it as part of the “gulag of Irish institutions” that processed generations of Irish children.

Convicted of a malicious damage charge he contests to this day, Flynn said the institution he was in played an important role in bolstering Irish crime.

“Generations of individuals passed through and graduated into Mountjoy,” he said. “You can trace most of the adult criminals in Ireland at the moment into [these] institutions.

“The very foundations of gangland as we know it today originate in these jails.”

Research in 1997 showed 72 per cent of the population of Mountjoy had spent time in St Patrick’s.

However, John Lonergan, governor of the adult prison for 22 years, dismisses the idea St Patrick’s was a university for criminals. Rather, they were involved before being sent there, often committing crimes from as young as six or seven, he says.

The criminal records they obtained in their youth would have a damaging effect on their lives, Lonergan adds.

“It was nothing other than a prison and that is why it was fundamentally wrong. It wasn’t a [child-appropriate] detention centre, it was a prison.

“Would you go into St Patrick’s or Mountjoy to learn crime? You would if you wanted to get caught.”