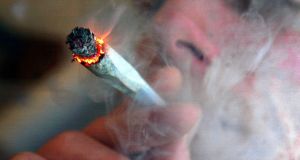 The research is likely to play a significant role in the ongoing debate on the decriminalisation of cannabis and other drugs in Ireland. Photograph: David Bebber/Reuters

There is no link between the strictness of Ireland’s drug laws and teenage cannabis use, according to a new study.

The international study, which appears in the latest International Journal of Drug Policy, contradicts previous research showing that young people are less likely to use cannabis in countries with strict anti-cannabis laws like Ireland.

It suggests the criminalisation of cannabis use has little or no impact on the decision of young people to use the drug.

There is no “statistically significant association between policy ‘liberalisation’ and higher odds of adolescent cannabis use”, it states.

The research is likely to play a significant role in the ongoing debate on the decriminalisation of cannabis and other drugs in Ireland.

A working group established by the Government is currently examining whether possession of small amounts of illegal drugs should be dealt with outside the criminal justice system.

It is understood the committee is considering recommending that drug users be dealt with using a diversion scheme which would see them referred for treatment rather than to the criminal courts.

A similar initiative has been in operation in Portugal since 2001 with broadly positive results, including a reduction in overdose deaths and cases of HIV.

Opponents of more liberal drug laws have pointed to a 2015 study by researchers from three universities which stated that countries which have decriminalised cannabis saw significantly more young people using the drug.

The 2015 study, along with other research showing a significant increase in the strength of the drug in recent years, has been used to argue against any liberalisation of drug laws.

It drew on three surveys of over 170,000 adolescents in 38 European and North American countries, including almost 5,000 from Ireland, a country it categorised as having strict drug laws.

“Cannabis liberalisation with depenalisation and partial prohibition policies was associated with higher levels of regular cannabis use among adolescents,” the authors wrote.

However, according to Prof Alex Stevens of Kent University, author of the most recent study, there were several issues with how the 2015 data was interpreted. His re-examination of the same data, using improved methods of analysis, found no statistically significant link between strict laws and cannabis use.

The new research improves upon the 2015 study by taking account of the difference in cannabis use between boys and girls and by utilising more of the available data from the survey, Prof Stevens said.

“My new study joins several others which show no evidence of a link between tougher penalties and lower cannabis use. This is useful information for governments as they consider the best way to deal with cannabis.

“As it is, the harms and costs of imposing criminal convictions on people who use cannabis do not seem to be justified by an effect in reducing cannabis use.”