Direct intervention being contemplated as violence increases in Al-Hawl camp 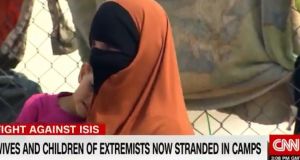 Lisa Smith travelled to northern Syria four years ago, where she married an Isis fighter, who was later killed. Photograph: CNN

Ms Smith (37), a former member of the Defence Forces from Dundalk, Co Louth, travelled to northern Syria four years ago, where she married an Isis fighter, who was later killed.

She and her two-year-old daughter recently fled the group’s stronghold Baghouz before being taken to the Al-Hawl refugee camp, some 300km away.

It is understood one option under consideration is to send Government officials to Al-Hawl to escort them to the Turkish border. They would then be flown home either on an Air Corps plane or a commercial flight, sources said.

When news first broke of Ms Smith’s presence in northern Syria last month, the Government indicated it was not prepared to send officials to bring her home due to safety concerns.

It is understood the Government has become more open to directly intervening in the situation due to the worsening conditions and increased violence within the camp, which is run by the US-backed Syrian Democratic Forces.

Ms Smith is in a section of Al-Hawl reserved for the wives and children of Isis fighters. They were segregated from other refugees several months ago due to violence between them and the victims of the terrorist group.

There are 68,000 people in Al-Hawl, which has a maximum capacity of 55,000. Camp authorities expect this to grow by thousands more as military operations against Islamic State come to an end.