Red Cross may help get Dundalk's Lisa Smith out of Syria 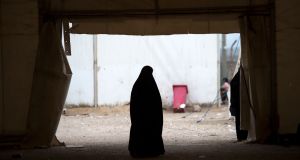 Efforts to bring alleged Islamic State supporter Lisa Smith back to Ireland could begin as early as this week with the help of the Red Cross.

It is understood the Government has approached the International Committee of the Red Cross to request assistance in escorting Ms Smith and her two-year-old daughter from the Al-Hawl refugee camp in northeast Syria, which holds the wives and children of defeated Islamic State fighters.

A Red Cross spokesman yesterday refused to confirm or deny its role in the proposed operation or to say if it had been approached by the Irish Government, citing its policy of secrecy in such situations.

It is understood the Department of Foreign Affairs made a preliminary approach to the organisation as it is one of the few aid organisations with access to the section of the camp holding foreign Islamic State supporters, sources said.

The Red Cross also has experience of repatriating unaccompanied children from Syria, mostly ones whose parents were killed in fighting.

The initial proposal is for Red Cross staff to escort the Dundalk woman out of the Al-Hawl camp with the consent of the Kurdish authorities and to bring her to the Turkish border, where she will be flown home to Ireland, most likely on a commercial flight.

Once back in Ireland she is likely to face a security assessment and ongoing surveillance in light of her suspected sympathies with the terrorist organisation. Gardaí will also assess if she has committed any offence that could be prosecuted in Ireland, such as giving financial support to Islamic State, also known as Isis.

The plan has yet to be finalised but sources said it could be put into action before the end of the week.

Government officials are eager to act due to the worsening conditions in Al-Hawl. Last week women loyal to Isis, some of whom were armed, rioted in the camp and attacked the guards, who responded by firing over their heads.

Ms Smith, a former member of the Defence Forces, travelled to Syria about four years ago, where she married an Islamic State fighter, who was later killed.

Last week a woman in the camp thought to be Ms Smith told CNN journalist Jomana Karadsheh Scott she wanted to return to Ireland.

Ms Smith is being held with other women and children under armed guard, Scott told The Irish Times, and could not leave the camp without an armed escort.

“There is still support for Isis. Some of the women are afraid to speak in case they are seen by the more fanatical supporters,” Scott said.

There are women “from all over the world” in the camp and conditions are dire, she said. Shortly before her arrival a lice infestation had broken out among the many children there.

Efforts to arrange Ms Smith’s repatriation are likely to be complicated by a lack of communication. She has no phone and has not yet spoken to Government officials, although she has spoken briefly with her family through the Red Cross.

Most aid agencies are not permitted into her section of the camp and the media have now also been banned.

Al-Hawl, which has a maximum capacity of 55,000, is home to almost 65,000 refugees, with thousands more arriving every week as the last Isis territory falls to Kurdish forces.

Nearly 150 people, the vast majority of them children, have died on the way to Al-Hawl or shortly after arriving, according to Paul Donohoe of the International Rescue Committee. “It’s mostly infants and babies,” he said.

“The camp is at breaking point. Twenty trucks could arrive at once with 2,000 people, some of whom could be injured in battle, injured by mines or dehydration. We look for urgent cases and either try to help them there and then or get them in an ambulance to the local hospitals, which are totally overwhelmed.”

The International Rescue Committee and the Red Cross, as well as Kurdish authorities, have urged western governments to repatriate their citizens from the camps.