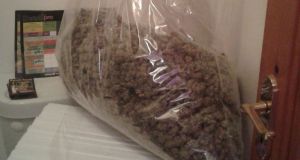 A view of the 7kg of cannabis herb discovered by gardaí in Carlow on Friday. Photograph: An Garda Síochána

Three men have been arrested after gardaí seized €220,000 worth of cannabis in Carlow on Friday.

Gardaí searched a house at Borlum Wood on the Green Road in Carlow Town at about 8pm as part of an anti-drugs operation.

They discovered 7kg of cannabis herb in an upstairs room and 100 cannabis plants in a second room.

Two men in their 50s and a man in his 30s were taken to Carlow Garda station and are being detained under Section 2 of the Criminal Justice (Drug Trafficking) Act, 1996.

All three men are Lithuanian nationals, according to gardaí.

The scene was preserved overnight pending a full technical examination and gardaí said the operation is ongoing.