The who’s who in the Patricia O’Connor murder case 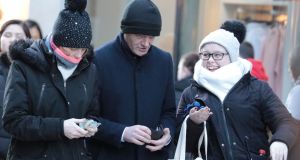 Louise O’Connor (left), Keith Johnston (centre), and Stephanie O’Connor outside the Criminal Courts of Justice during their trial. Photograph: Collins.

Four people have now been found guilty in connection with the death of Patricia O’Connor almost three years ago.

Kieran Greene was convicted of Mrs O’Connor’s murder, while Louise O’Connor, Stephanie O’Connor and Keith Johnston were found guilty of impeding the apprehension or prosecution of Greene, knowing or believing him to have murdered the 61-year-old on May 29th, 2017.

The trial heard that Mrs O’Connor’s husband, Augustine ‘Gus’ O’Connor previously pleaded guilty to reporting his wife as a missing person, knowing she was already dead.

Father-of-three Kieran Greene (35) was earlier this week found guilty of murdering Mrs O’Connor, a retired hospital worker,by inflicting “catastrophic injuries” on her in a sustained attack, which lasted up to 20 minutes and took place in the bathroom of her home.

In an interview with gardaí in June 2017, he said he was in the bathroom and Mrs O’Connor walked in and hit him with a hurl, saying “Get out, Get out”.

He said he grabbed the hurl from her, hit her and did not know want happened next as when he woke up there was blood everywhere and he panicked.

Greene maintained in that account that he had disarmed Mrs O’Connor and acted in self-defence by hitting her and as a result of that she may have died.

He then admitted to putting the body into Mrs O’Connor’s car and driving the corpse to Co Wexford, where he buried it in a shallow grave before returning there days later when the body was dismembered.

The seven-week trial heard that her body parts were found scattered at nine locations over a 30km range in the Dublin and Wicklow mountains between June 10th and 14th, 2017.

Former deputy state pathologist Michael Curtis told the trial that Mrs O’Connor’s head was struck a minimum of three blows with a solid implement and the cause of death was blunt force trauma to the head.

The trial heard that six months after he was charged with Mrs O’Connor’s murder, Greene changed his account of killing and dismembering his then partner’s mother.

While on remand in Cloverhill Prison in December 2017, Greene told gardaí that he had taken “the rap” and felt he was being set-up, as his partner Louise O’Connor had started going out with her ex-boyfriend Keith Johnston again.

Greene also told detectives then that Mrs O’Connor attacked him with a hurley. However, he said her husband came into the bathroom after he fell to the ground and admonished his wife saying: “What the f*** are you doing?”

Greene told detectives that Gus O’Connor had killed his wife using a crowbar but that he had taken the blame.

The deceased’s granddaughter Stephanie O’Connor was found guilty of impeding the apprehension or prosecution of Greene, knowing or believing him to have murdered Mrs O’Connor.

The jury accepted the State’s case that, in order to cover up the murder, Stephanie O’Connor dressed up as her grandmother as “a ruse” to pretend she had stormed out of the house on the night of the murder. She had pleaded not guilty.

In her closing speech, prosecution counsel Róisín Lacey SC said Stephanie had entered into “a charade” by disguising herself as Mrs O’Connor to create “an indelible record” on CCTV footage that Mrs O’Connor was actually “alive and well” and had walked out of the house at 9.34pm.

This was done in case it was needed to bolster any statements to anyone who was legitimately looking for Mrs O’Connor or if she was reported as a missing person down the line, Ms Lacey said.

The trial heard Stephanie O’Connor had firmly placed herself inside the house at 9.34pm that night but CCTV footage covering the rear of the property showed this to be a lie.

Evidence was given that a woman could be seen leaving the front of the house in CCTV footage at 9.34pm and walking quickly down the drive with a suitcase in her hand. At 10.05pm that night, a woman with a suitcase appeared at the left-hand side of the house and went in the back door.

Ms Lacey said this woman had walked in a “sprightly” manner which was very different to the deportment of Mrs O’Connor and was wearing a hooded jacket for the purpose of disguising her hair and facial features.

Patricia O’Connor’s son, Richard O’Connor, confirmed at the trial that this figure going in the rear of the house was Stephanie.

Mother-of-five Louise O’Connor was found guilty of impeding the apprehension or prosecution of Greene , knowing or believing him to have murdered her mother.

The jury accepted the State’s case that the 41-year-old had agreed to or acquiesced in her daughter Stephanie disguising herself as Mrs O’Connor in order to conceal the fact that she was dead. She pleaded not guilty.

During the trial, Det Garda David Connolly told the prosecution that he interviewed Louise O’Connor at Bray Garda station on September 3rd, 2017, and showed her CCTV footage of people entering and leaving the house at Mountainview Park on May 29th and 30th, 2017. She had been arrested the previous day on suspicion of murdering her mother.

In that interview, Louise O’Connor told gardaí the person seen closing the back door on May 29th at 10.06pm could have been her or Stephanie O’Connor or Greene.

“I’m guessing it was one of us as we were the only ones in the house,” she said, adding that all she could see in the CCTV footage was a white blur.

“It’s Houdini or someone, I don’t know who it is,” she added.

Asked by interviewing detectives why Greene, then her partner, was seen on CCTV footage closing the curtains at 6.52pm, when she and her children left the house to go to the park, the mother-of-five replied: “Why you asking me? Maybe he is dancing around naked after the shower”.

“Is closing curtains against the law?” she asked gardaí.

Detectives told her that it was “not the norm”.

“If you are saying we left so he could do something, you’re sadly mistaken,” she said.

Detectives put it to her that they believed Mrs O’Connor was dead when she and the children got back from a visit to a park and a Tesco store.

“How could she be? She walked out,” she replied.

Gardaí also put it to Louise O’Connor that it was her daughter Stephanie walking out of the house at 9.34pm carrying the suitcase.

“That’s my ma walking out,” she replied, adding that if her mother had been dead when she got home, she would have “punched Kieran’s lights out”.

The jury found Keith Johnston guilty of impeding the apprehension or prosecution of Greene, knowing or believing him to have murdered Mrs O’Connor.

In his interviews, Johnston said he went on a “shopping spree” with Greene the day before the remains were found but he said he did not know why he wanted these items.

Greene claimed that after buying the various tools and items, he and Johnston drove to Wexford and dug up the body. He alleged that Johnston then spent three to four hours dismembering the body with a saw before they disposed of the parts in the Wicklow mountains. He said Johnston later disposed of the tools in Dodder Valley Park in Tallaght and burnt the clothes they had worn.

The trial heard evidence that Johnston’s mobile phone “tallied” with CCTV footage and had pinged off a mast near his house in Tallaght on the night of June 9th, when Greene alleged the dismemberment took place.

The trial heard the handyman, an ex-partner of Louise O’Connor and father of two of her children including Stephanie O’Connor, started redecorating the bathroom where Mrs O’Connor was murdered soon after the event.

Greene said Johnston came to the house and scraped the grout off the tiles in the bathroom and painted walls.

Gardaí put it to Johnston that the bathroom had “been the same” for 10 or 11 years and then Mrs O’Connor got killed “and there he was” fixing a shower step and re-grouting floor tiles.

Johnston told gardaí that he knew “it looks bad but that’s just the way it is” and that he was trying to do a good thing for the family by doing the work. He agreed he had said in a statement that he could have been clearing up a crime scene when he was doing the grouting but regretted saying this.

Mr Justice Paul McDermott during the trial withdrew a charge against Johnston, of engaging in the refurbishment of a bathroom at Mrs O’Connor’s home between May 31st, 2017 and June 9th, 2017, in order to destroy or conceal any evidence relating to the murder.

Mrs O’Connor’s husband Augustine ‘Gus’ O’Connor pleaded guilty to reporting her as a missing person, knowing she was already dead, thereby impeding the apprehension of an offender.

The Central Criminal Court heard that the 75-year-old, of Mill Close, Glasheen, Stamullen, Co Meath was charged with impeding the apprehension or prosecution of an offender in October 2018.

Det Insp Brian O’Keeffe said gardaí spoke to Gus O’Connor on June 14th, 2017 because of the missing person report he had provided at Rathfarnham station on June 1st, 2017.

He was arrested on suspicion of involvement in his wife’s murder on September 2nd, 2017, and was questioned by gardaí and subsequently released.

Greene claimed to detectives that Gus O’Connor had killed his wife using a crowbar and that he had taken the blame.