Garda warning after €500,000 of ‘movie money’ found in circulation 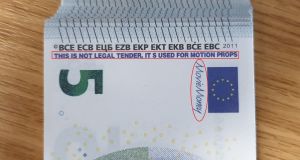 Fake money used in films with a nominal value of almost half a million euro has been found in circulation, An Gard Síochána has said. Image: Garda Facebook Page.

Fake money used in films with a nominal value of almost half a million euro has been found in circulation, An Gard Síochána has said.

Businesses dealing with cash were on Monday advised to keep an eye out for the currency, also dubbed “prop money”.

“An Garda Síochána and the Office of the Revenue Commissioners wish to highlight that there has been a significant increase in the detection of novelty euro notes,” the force said in a statement.

“These notes are often marked as ‘movie money’ or ‘prop money’ and bear a strong resemblance to genuine Euro notes, however they do not contain the security features.

Any attempt to use fraudulent currency is an offence under the Criminal Justice (Theft and Fraud Offences) Act 2001 and has a potential prison sentence of 10 years, a Garda spokesman siad.

“These notes are easily identifiable if precautionary checks are made. Also people who try to tender such notes as real face prosecution, a possible prison sentence and a conviction, which is for life,” he said.