Grandmother’s body was dismembered into 15 parts that were found in Dublin, Wicklow mountains 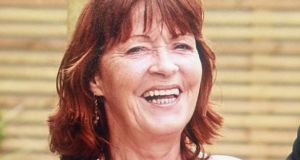 A father-of-three has been found guilty of murdering a retired grandmother, whose dismembered remains were found scattered across the Dublin and Wicklow mountains nearly three years ago.

The jury accepted the prosecution’s case that Kieran Greene (35) had inflicted “catastrophic injuries” on Patricia O’Connor (61) in a sustained attack, which lasted up to 20 minutes and took place in the bathroom of her Rathfarnham home.

They agreed that Greene bludgeoned her to death with a hurley and that his claim of self-defence “did not hold any water”.

It was the State’s contention that there was no evidence of a single defensive wound on Mrs O’Connor’s body and Greene bore an “ill-will” and “a particular animus or bad feeling” against the deceased.

Prosecution counsel Roisin Lacey SC said in her closing speech that Greene had adopted a highly aggressive stance and had told gardaí in his interviews that he had felt angry as he hit Mrs O’Connor. Ms Lacey said the jury was entitled to infer that he had the requisite intention to kill or cause serious injury to her.

The panel of six men and five women rejected Greene’s claim that Mrs O’Connor’s husband, Augustine “Gus” O’Connor, had killed his wife using a crowbar and he [Greene] had taken the blame.

Greene had pleaded not guilty to murdering the retired hospital worker at her home in Mountainview Park, Rathfarnham, Dublin 14 on May 29th 2017.

The jury took four hours and 24 minutes to come to their unanimous verdict.

As the jury filed back into court at 4pm, the forewoman had the issue paper in her hand and gave it to the registrar. Mr Justice Paul McDermott then asked the jurors to return to the court at 10.30am on Wednesday morning. However, as the jury got up to leave for the day, the registrar noticed that a count had been entered in one of the boxes on the issue paper. The judge then called the 11 jurors back and asked them to take their seats again.

Following this, the registrar asked the forewoman of the jury if they had reached a decision on any count upon which they were all agreed. The forewoman replied “yes” and the registrar proceeded to read out Greene’s unanimous guilty verdict.

Mr Justice McDermott told the jury that they could return to the Central Criminal Court on Wednesday morning to continue their deliberations in relation to the other three accused.

The seven-week trial heard that the body of Mrs O’Connor was dismembered into 15 separate parts that were found at nine different locations over a 30km range in the Dublin and Wicklow mountains between June 10th and 14th 2017.

Former Depute State Pathologist, Dr Michael Curtis, gave evidence that Mrs O’Connor’s head was struck a minimum of three blows with a solid implement and the cause of death was blunt force trauma to the head.

Greene had given two accounts of Mrs O’Connor’s death. In an interview with gardaí in June 2017, Greene said he was in the bathroom when Mrs O’Connor walked in and hit him with a hurl on the wrist, saying “Get out, Get out”. He said he grabbed the hurl from her, hit her and did not know want happened next as when he woke up there was blood everywhere and he panicked.

Greene maintained in the June account that he had disarmed Mrs O’Connor and acted in self-defence by hitting her and as a result of that she may have died.

The trial heard that six months after he was charged with her murder, Greene changed his account of killing and dismembering his partner’s mother. While on remand in Cloverhill Prison in December 2017, Greene told gardaí that he had taken “the rap” and felt he was being set-up, as his girlfriend Louise O’Connor subsequently started going back out with her ex-boyfriend Keith Johnston.

Greene also told detectives in his December account that Mrs O’Connor attacked him with a hurley. However, he said Mrs O’Connor’s husband, Augustine “Gus” O’Connor, came into the bathroom after he fell to the ground and admonished his wife saying: “What the f*** are you doing?” Greene told detectives that Mr O’Connor had killed his wife using a crowbar and he [Greene] had taken the blame.

Evidence was given that Gus O’Connor was originally part of the trial but shortly before it began, he pleaded guilty to reporting his wife Mrs O’Connor as a missing person to gardaí at Rathfarnham Garda Station, Dublin 14 on June 1st, 2017, when he knew that she was already dead.

In her closing speech, prosecution counsel Ms Lacey said that Greene had changed his “confession” of what happened to Mrs O’Connor six months after being charged with her murder because of the “oldest motive in the book — jealousy”.

She argued that Greene had been jealous over what he thought was “a growing relationship” between his partner Louise O’Connor and her ex-boyfriend Keith Johnston. Ms Lacey said “the sea change” that came about in the December interview was not reliable.

Furthermore, Ms Lacey submitted that Greene’s June interview reflected the reality of what occurred in the bathroom and “dovetailed completely” with Dr Curtis’ findings, that Greene “alone was in the altercation with her, that he alone struck the fatal blow”.

However, defence counsel Conor Devally SC argued in his closing speech that Greene told a “whole pack of lies” when he made a “so-called confession” to killing Mrs O’Connor in June.

He also said his client, who had been described as “nothing but a moron” and a “fool”, had taken it on himself to be a martyr over the gruesome death of his partner’s mother. Counsel said the December statement was “full of truth” and the “proper story” and submitted that Gus O’Connor had been “intimately involved” on the night.

Mr Devally said it was “obvious that Mrs O’Connor had a go at him” and a potential defence of self-defence had been mentioned. He said the jury should apply whatever defence was available on the evidence. He also submitted that his client had a “developmental difficulty” and was portrayed as “a donkey” yet he had supposedly buried Mrs O’Connor in a shallow grave in the middle of the night.

Mr Justice McDermott had told the jurors in his charge that they may find it useful to firstly consider the case against Greene and then move onto the separate trials of his three co-accused, who are charged with impeding the apprehension or prosecution of Greene.

The jury will return to court at 10.30am on Wednesday to continue their deliberations in relation to the deceased’s daughter Louise O’Connor, her granddaughter Stephanie O’Connor and Keith Johnston.

The jury can now return two verdicts in relation to Louise O’Connor, Stephanie O’Connor and Keith Johnston, who are accused of impeding the apprehension or prosecution of Kieran Greene, knowing or believing him to have committed an arrestable offence. These are: not guilty or guilty of knowing that Greene had committed murder.

Louise O’Connor (41) and Stephanie O’Connor (22), both of Millmount Court, Dundrum Road, Dublin 14, and Louise O’Connor’s ex-partner Keith Johnston (43), of Avonbeg Gardens, Tallaght, Dublin 24 are all charged with impeding the apprehension or prosecution of Kieran Greene, knowing or believing him to have committed an arrestable offence, to wit the murder of Mrs O’Connor on May 29th 2017.

Mother-of-five Louise O’Connor has pleaded not guilty to agreeing to or acquiescing in her daughter Stephanie O’Connor disguising herself as Patricia O’Connor at Mountainview Park, Rathfarnham, Dublin 14 on May 29th 2017 in order to conceal the fact that Patricia O’Connor was dead.

Stephanie O’Connor has pleaded not guilty to disguising herself as Mrs O’Connor at Mountainview Park, Rathfarnham, Dublin 14 at a point in time after her murder on May 29th 2017 in order to conceal the fact that she was already dead.

Mr Johnston has pleaded not guilty to assisting Greene in the purchase of various implements at Woodie’s, Mr Price, B&Q and Shoe Zone, Tallaght, Dublin 24 on June 9th 2017, which were to be used in the concealment of the remains of Mrs O’Connor.