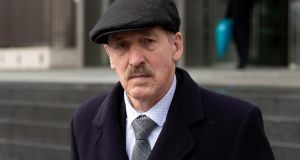 A man whose wife’s dismembered remains were found scattered in the Dublin and Wicklow mountains has pleaded guilty to reporting her as a missing person, knowing she was already dead, a murder trial jury has been told.

The Central Criminal Court heard that Augustine ‘Gus’ O’Connor (75) of Mill Close,Glasheen, Stamullen, Co Meath was charged with impeding the apprehension or prosecution of an offender in October 2018.

Det Insp Brian O’Keeffe told the jury that Mr O’Connor was originally part of the trial but shortly before it began, he pleaded guilty to reporting his wife Patricia O’Connor as a missing person at Rathfarnham Garda station on June 1st, 2017, when he knew she was already dead.

Father-of-three Kieran Greene (35), has pleaded not guilty to murdering Mrs O’Connor (61) at her home in Mountainview Park, Rathfarnham, Dublin 14 on May 29th, 2017.

The deceased’s daughter Louise O’Connor (41) and granddaughter Stephanie O’Connor (22), both of Millmount Court, Dundrum Road, Dublin 14, and Louise O’Connor’s ex-partner Keith Johnston (43), of Avonbeg Gardens, Tallaght, Dublin 24 are all charged with impeding the apprehension or prosecution of Kieran Greene, knowing or believing him to have committed an arrestable offence, to wit the murder of Mrs O’Connor on May 29th, 2017.

The trial has heard the body of Mrs O’Connor was dismembered into 15 separate parts that were found at nine different locations over a 30km range in the Dublin and Wicklow mountains between June 10th and 14th, 2017.

Former Deputy State Pathologist Dr Michael Curtis has given evidence that Mrs O’Connor’s head was struck a minimum of three blows with a solid implement and the cause of death was blunt force trauma to the head.

Evidence has already been given to the jury that Mr O’Connor and the deceased’s son Richard O’Connor made a missing person report concerning Mrs O’Connor to gardai at Rathfarnham Garda station on June 1st, 2017 and her details were entered into the Pulse system.

Det Insp O’Keeffe, a senior investigating officer in the case, was on Tuesday tendered by the prosecution at the request of defence counsel Conor Devally SC, for Mr Greene.

Det Insp O’Keeffe agreed with Mr Devally that matters commenced with Mr Greene presenting himself at Rathfarnham Garda station on a voluntary basis on June 12th, 2017 to say that he was involved in the incident.

The witness said Mr Greene told gardaí that Mrs O’Connor had attacked him in the bathroom on May 29th and it resulted in her being injured and lying on the bathroom floor. Mr Greene told gardai that he buried her in a shallow grave in Wexford and he was later arrested at the graveside, said Det Insp O’Keeffe. Following this, Mr Greene was detained at a Garda station and interviewed on a more formal basis, he said.

Det Insp O’Keeffe agreed with counsel that Mr Greene maintained he was the only participant involved in the physical altercation with Mrs O’Connor and said he had acted alone in removing her body from Mountainview, driving her to Wexford, burying her and subsequently returning there to dismember her.

Mr Devally put it to the witness that his client stated in his interviews that he did not want the other people in the house to find out. “I recall a reference to the kids being safe,” he replied.

Det Insp O’Keeffe said gardaí spoke to Mr O’Connor on June 14th, 2017 because of the missing person report he had provided to them on June 1st.

Mr O’Connor was arrested on suspicion of his involvement in his wife’s alleged murder on September 2nd, 2017, said the witness, adding that he was questioned by gardai and subsequently released.

Det Insp O’Keeffe agreed with Mr Devally that nothing in Mr Greene’s statements from June 12th and 13th, 2017 “had given rise” to anyone else being arrested.

However, Mr Greene made contact with gardai on December 6th, 2017 as he wished to speak to them about the case. Detective Sergeant Brian Hanley attended at Cloverhill Prison to meet with Mr Greene on December 9th, said the witness.

As a result of the December interview, “more than a couple of steps were taken”, said Det Insp O’Keeffe, including a search of the Dodder river where two hacksaws and an axe were found. The witness agreed that this information was only obtained by Det Sgt Hanley as a result of meeting Mr Greene in Cloverhill Prison on December 9th and if it was not for this interview with Mr Greene, gardai would not have searched the area. Det Insp O’Keeffe further agreed that one of the hacksaws appeared to have human hair caught in the blade.

A warrant for the re-arrest of Mr Johnston for impeding a prosecution had also been sought as a result of the December interview, said the witness, adding that there were no other re-arrests.

Subsequent to that, the co-accused were charged with the offences they are now on trial for, he said. Mr O’Connor was charged with impeding the apprehension or prosecution of an offender on October 18th, 2018, he said.

The witness agreed with counsel that Mr O’Connor had been part of this trial but on the first date it was listed for hearing, some weeks ago, he took “a step” which dispensed with the need to continue with his trial and pleaded guilty to reporting his wife missing on June 1st, 2017, when he knew she was already dead, thereby impeding the apprehension of an offender.

Mr O’Connor was invited to react to what was said about him by Mr Greene, said Det Insp O’Keeffe.

Following this, prosecution counsel Roisin Lacey SC told the the jury that the prosecution had closed its case. Defence barristers for each of the accused said they had applications to make to the court in the absence of the jury.

The trial has already heard that six months after he was charged with her murder, Mr Greene changed his account of killing and dismembering his partner’s mother.

The accused man told gardai on December 9th that he had taken “the rap” and felt he was being set-up, as his girlfriend Louise O’Connor subsequently started going back out with her ex-boyfriend Keith Johnston.

In the December interview, Mr Greene told interviewing detectives that Mrs O’Connor attacked him with a hurley. He said Mrs O’Connor’s husband, Augustine ‘Gus’ O’Connor, came into the bathroom after he fell to the ground and gave out to his wife saying: “What the f**k are you doing?”

Mr Johnston has pleaded not guilty to assisting Mr Greene in the purchase of various implements at Woodie’s, Mr Price, B&Q and Shoe Zone, Tallaght, Dublin 24 on June 9, 2017, which were to be used in the concealment of the remains of Mrs O’Connor.

Mr Justice Paul McDermott asked the jury of six men and six women to return on Wednesday at 12pm.