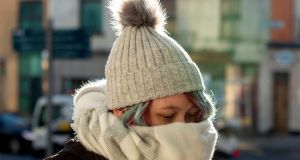 Stephanie O’Connor (22), of Millmount Court, Dundrum Road, Dublin 14, pleaded not guilty to disguising herself as Mrs O’Connor at a point in time after her murder. File photograph: Collins Courts

A Central Criminal Court jury has convicted a 22-year-old woman of disguising herself as her dead grandmother, who had been bludgeoned to death by her mother’s partner, in order to conceal her murder.

Father-of-three Kieran Greene (35) was on Tuesday found guilty of murdering retired hospital worker Patricia O’Connor (61) and inflicting “catastrophic injuries” on her in a sustained attack, which lasted up to 20 minutes and took place in the bathroom of her Rathfarnham home.

The deceased’s granddaughter Stephanie O’Connor was on Wednesday found guilty of impeding the apprehension or prosecution of Greene, knowing or believing him to have murdered Mrs O’Connor on May 29th, 2017.

The jury accepted the State’s case that, in order to cover up the murder, Stephanie O’Connor had dressed up as her grandmother as “a ruse” to pretend that Mrs O’Connor had stormed out of the house on the night.

The jurors took eight hours and 36 minutes to come to their unanimous verdict. The forewoman of the jury confirmed to the registrar that they had not reached any further verdicts in relation to two remaining counts against Stephanie’s parents, Louise O’Connor (41) and Keith Johnston (43).

Following Wednesday’s verdict, Mr Justice Paul McDermott asked the jury of six men and five women to return to court on Thursday morning at 10.30am to resume their deliberations in respect of the two remaining counts.

Stephanie O’Connor, of Millmount Court, Dundrum Road, Dublin 14 had pleaded not guilty to disguising herself as Mrs O’Connor at Mountainview Park, Rathfarnham, Dublin 14, at a point in time after her murder on May 29th, 2017, in order to conceal the fact that she was already dead.

She was charged with impeding the apprehension or prosecution of Kieran Greene, knowing or believing him to have committed an arrestable offence, namely the murder of Mrs O’Connor on May 29th, 2017.

The seven-week trial heard that the body of Mrs O’Connor, of Mountainview Park, Rathfarnham, Dublin 14, was dismembered into 15 separate parts that were found at nine different locations over a 30km range in the Dublin and Wicklow mountains between June 10th and 14th, 2017.

Former deputy state pathologist Michael Curtis gave evidence that Mrs O’Connor’s head was struck a minimum of three blows with a solid implement and the cause of death was blunt force trauma to the head.

In her closing speech, prosecution counsel Róisín Lacey SC said Stephanie had entered into “a charade” by disguising herself as her grandmother to create “an indelible record” on CCTV footage that the former hospital cleaner was actually “alive and well” and had walked out of the house at 9.34pm that night.

This was done in case it was needed to bolster any statements to anyone who was legitimately looking for Mrs O’Connor or if she was reported as a missing person down the line, she said.

Stephanie had firmly placed herself inside the house at 9.34pm that night but CCTV footage covering the rear of the property showed this to be a lie. On the footage, she can be seen in the back garden.

Ms Lacey said this woman had walked in a “sprightly” manner which was very different to the deportment of Mrs O’Connor and was wearing a hooded jacket for the purpose of disguising her hair and facial features.

At 10.05pm, the woman with a coat over her arm and carrying a suitcase could be seen “scuttling along” the side passage and entering the rear door of the house, said Ms Lacey. Patricia’s son, Richard O’Connor, confirmed at the trial that this figure going in the rear of the house was his niece Stephanie.

A black suitcase with a distinctive label was later found in Gus O’Connor’s bedroom on June 21st and the prosecution maintained that this was the same “prop” that Stephanie had been carrying on May 29th.

It was the State’s case that Stephanie’s laptop was an “integral part” of the charade as it was dormant between 9pm and 10.10pm on the night, which “correlated exactly” with the period of time when they said Stephanie was out of the house disguised as her grandmother.

In his closing speech, defence counsel Garnet Orange SC, for Stephanie, said there was “no hard and direct evidence” that his client was away from the house during the relevant period of time and there was a frailty in the CCTV footage as it did not cover the front porch of the house.

The jury will continue their deliberations on Thursday in relation to the two other accused, Louise O’Connor and Keith Johnston.

Mother-of-five Louise O’Connor has pleaded not guilty to agreeing to, or acquiescing, in her daughter Stephanie O’Connor disguising herself as Mrs O’Connor at Mountainview Park, Rathfarnham, Dublin 14, on May 29th, 2017, in order to conceal the fact that Patricia O’Connor was dead.

Keith Johnston has pleaded not guilty to assisting Greene in the purchase of various implements at Woodie’s, Mr Price, B&Q and Shoe Zone, Tallaght, Dublin 24, on June 9th 2017, which were to be deployed in the concealment of the remains of Mrs O’Connor.

Louise O’Connor of Millmount Court, Dundrum Road, Dublin 14, and her ex-partner Keith Johnston, of Avonbeg Gardens, Tallaght, Dublin 24, are charged with impeding the apprehension or prosecution of Kieran Greene, knowing or believing him to have committed an arrestable offence, namely the murder of Mrs O’Connor on May 29th, 2017.