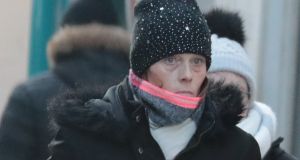 Louise O’Connor, of Millmount Court, Dundrum, who has been found guilty of of a ‘ruse’ to hide Patricia O’Connor’s murder. Photograph: Collins 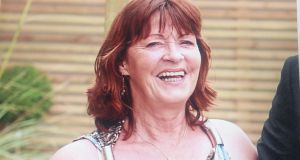 A jury has convicted a woman of agreeing to “a ruse” in which her daughter disguised herself as her grandmother, who had been bludgeoned to death, in order to conceal the murder.

The deceased’s daughter Louise O’Connor (41) was found guilty at the Central Criminal Court on Thursday of impeding the apprehension or prosecution of Kieran Greene (35) knowing or believing him to have murdered Patricia O’Connor (61). She had pleaded not guilty.

The jury found Louise O’Connor, of Millmount Court, Dundrum Road, Dublin 14, was an “integral part” of the charade and had acted in support of her daughter Stephanie O’Connor (22) disguising herself as Patricia O’Connor at Mountainview Park, Rathfarnham, Dublin 14 on May 29th, 2017 in order to conceal the fact she was dead.

Stephanie O’Connor was found guilty of dressing up as her grandmother and pretending she had “stormed out of the house” on the night, in “a ruse” to cover up the murder. Greene was found guilty of murdering Patricia O’Connor and inflicting “catastrophic injuries” on her in a sustained attack in the bathroom of her home.

The jury accepted the State’s case that Stephanie had entered into “a charade” by disguising herself as Patricia O’Connor to create “an indelible record” on CCTV footage that she was actually “alive and well” and had walked out of the house at 9.34pm.

In her closing speech, prosecutor Roisin Lacey SC said this was done in case it was needed to bolster any statements to anyone who was legitimately looking for Patricia O’Connor or if she was reported as a missing person down the line.

The jurors took more than 10 hours to come to a unanimous verdict in Louise O’Connor’s case.

The forewoman of the jury confirmed to the registrar that a further verdict in relation to the remaining count against Louise’s ex-boyfriend Keith Johnston (43) had not been reached. They will continue their deliberations on Thursday afternoon.

The seven-week trial heard Patricia O’Connor’s body was dismembered into 15 parts that were found at nine locations over a 30km range in the Dublin and Wicklow mountains between June 10th and 14th, 2017.

Former deputy State pathologist Dr Michael Curtis gave evidence that Patricia O’Connor’s head was struck a minimum of three blows with a solid implement and the cause of death was blunt force trauma to the head.

Ms Lacey said in her closing statement that the cases against Stephanie O’Connor and Louise O’Connor were “inextricably linked”.

Stephanie O’Connor was seen talking in the back garden of Patricia O’Connor’s home her mother and Greene at 9.15pm and 9.21pm on the night of the murder. Ms Lacey said a “plan was hatched” at these times to have Stephanie O’Connor pretend “to storm out of the house” in the guise of her grandmother.

Evidence was given that a female could be seen leaving the front of the house in CCTV footage at 9.34pm on May 29th, 2017 and walking quickly down the driveway with a suitcase in her hand.

At 10.05pm that night, a female with a coat over their arm and suitcase appeared at the side of the house and went in the back door.

When shown the footage of the figure emerging from the house at 9.34pm, Louise O’Connor identified the person as Patricia O’Connor.

“Louise is quite clear that it is her mother leaving the house, there is no equivocation, no ambiguity and no margin for error,” said Ms Lacey.

Despite there being no direct evidence of Louise O’Connor agreeing or acquiescing to her daughter disguising herself, the prosecution said the jury could infer this from the coincidence in timing.

She was seen on CCTV walking out of the house a minute after the woman left at 9.34pm and again five minutes before this person returned.

Stephanie O’Connor told gardaí that CCTV footage at 10.05pm showed her coming from the garden shed but she could not remember how she got out there. She said she was bringing in a bag from the shed for her mother.

Greene was seen on CCTV footage closing the curtains at the back of house on May 29th, 2017 at 6.52pm. A minute later Louise O’Connor, Stephanie O’Connor and some of the children left the house to go to the park.

Evidence was given that when gardaí asked Louise O’Connor in her interviews why she had left the house to go to the park, she replied that she wanted “to get peace from my mum”.

When gardai asked if they had left the house to get “permanent peace”, Louise O’Connor denied this, stating: “If you are saying we left so he [GREENE]could do something, you’re sadly mistaken”.

Louise O’Connor told interviewing detectives that she did not “harm a hair” on her mother’s head and said she would go to her grave knowing that. She also told gardaí that despite everything, she really loved her mother.

Defence counsel Michael Bowman SC, with John Griffin BL, said in his closing speech that his client’s case was “very different” to the other cases. There was “no smoking gun” establishing the guilt of Louise O’Connor and the prosecution had engaged in “wild speculation”, he said, as an “evidential deficit” existed in her case.

Greene had given two accounts of Patricia O’Connor’s death.

He claimed he was the only one involved in the physical altercation and had acted alone in removing her body from the house, burying her in a shallow grave in Co Wexford and subsequently dismembering her.

The trial heard that six months after he was charged with her murder, Greene changed his account of killing and dismembering his then partner’s mother.

While on remand in Cloverhill Prison in December 2017, Greene told gardaí he had taken “the rap” and felt he was being set-up as Louise O’Connor subsequently started going back out with her ex-boyfriend Keith Johnston.

In his December interview, Greene claimed he was not responsible for Patricia O’Connor’s death, that her husband Augustine ‘Gus’ O’Connor had killed her with a crowbar and that other family members had been involved in the death.

The jury will resume its deliberations on Friday in relation to the remaining accused, Mr Johnston.

He has pleaded not guilty to assisting Greene in purchasing various implements at Woodie’s, Mr Price, B&Q and Shoe Zone, Tallaght, Dublin 24 on June 9th, 2017, which were to be deployed in the concealment of the remains of Patricia O’Connor.

Mr Johnston is Louise O’Connor’s ex-partner and father to two of her five children, including Stephanie O’Connor.