Analysis: The outgoing Chief Justice has reached the end of a remarkable career 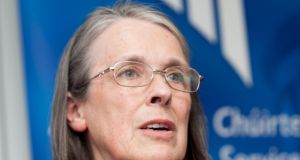 When, in December 1992, Susan Denham became the first woman to be appointed to the Supreme Court, it was a culture shock for her and for the institution she joined. The court had had a traumatic year. Just two months earlier, one of its members, Niall McCarthy, and his wife had been killed in a car crash in Spain.

The previous February, in the X case on abortion, the judges had found themselves in the unfamiliar glare of the international media spotlight when deciding perhaps the most controversial case ever to come before an Irish court. They found it so difficult that they never spoke about it again as a group.

Into this world came Denham – a liberal, Protestant woman, 20 years younger than her new colleagues. Initially she was surprised by how isolated the judges were; the case load was relatively light, yet it was six months before she would have a cup of tea in a colleague’s chambers.

Later she would institute a weekly lunch, but back then the only regular gathering was the case conference, where in winter Chief Justice Tom Finlay would chair the discussion over a turf fire. She felt it was like stepping back in time.

On Friday morning, 25 years later, Denham made her final appearance on the Supreme Court bench. The conclusion of her remarkable career is also the end of an era for the court she has led as chief justice since 2011.

Only two judges – James Murnaghan (1925-53) and Brian Walsh (1961-90) – have been on it for longer. In her time there have been three presidents of Ireland and six taoisigh. More than half the people who have been on the Supreme Court since its establishment in 1924 have sat alongside her at some point.

In the Four Courts in the early 1970s, Denham belonged to a small group of women who broke new ground just as the women’s movement was raising its voice outside. In the macho world of the law library, she would often be the only woman in a courtroom.

When she and Mary Laffoy – another future Supreme Court judge – took silk on the same day in 1987, they discarded the old male frock coats that senior counsel wore and had new two-piece suits designed for themselves.

Even though she would later say that at the Bar her religious tradition made her feel more of an outsider than her gender, she also recalled, in her final remarks from the bench on Friday, that she never met hostility or prejudice.

On her first day in the Supreme Court conference room in 1992, “I felt . . . that I was on the shoulders of the pioneering women of previous generations.” She thought of women such as Gwyneth Bebb, whose application to become a solicitor was rejected in 1913 on the grounds that she was not “a person” under the relevant Act.

The eldest child of the former editor of The Irish Times, Douglas Gageby, Denham comes from a family with a tradition of both non-conformism and public service. Her mother was Dorothy Mary Lester, daughter of Seán Lester, a diplomat who became the first and only Irish Secretary General of the League of Nations.

Appointed to the Supreme Court by a Fianna Fáil-Labour coalition in 1992, Denham quickly put down a marker by giving the sole dissenting judgment in an abortion case, AG (Spuc) v Open Door Counselling, when the court rejected an application from a Dublin clinic to overturn a previous order that prevented it from assisting pregnant women to travel abroad for abortions or giving information on overseas clinics.

She also dissented in TD v Minister for Education in 2001, where a majority on the court held that Judge Peter Kelly had been wrong to direct the State to act on a pledge to build and open a number of secure units for vulnerable children.

Her early judgments signalled what would become a recognisable style – clear, unadorned, principled – that would mark both her writing and, in time, her leadership. Within the court, she was seen as a conciliator, a consensus-builder, a diplomat.

Privately, the court split badly over the Sheedy Affair in 1999, a controversy that eventually forced then Supreme Court judge Hugh O’Flaherty to step down. When two other court members had earlier threatened to resign over the issue, it was Denham who shuttled between them, trying to cool things down.

She was also annoyed by the mess the Supreme Court got itself into in 2006, when it had to perform what many lawyers saw as a last-minute legal somersault so as to prevent more than a dozen sex offenders walking out of prison because of its decision to strike down a long-standing sexual offences law.

A year earlier, Denham had suggested a solution that would have averted the crisis, but the group hadn’t taken it up.

(In an interesting coda to that episode, the Supreme Court in her final months as its chief this year broke new ground by introducing the concept of “suspended declarations of unconstitutionality”, which will make it easier for judges to press the nuclear button and declare a law unconstitutional without setting off unintended consequences.)

In time Denham appeared to tack towards the centre of the court. Or perhaps the centre came closer to her. She believed in a living constitution, one that adapted to changes in society.

Her critics argued that as chief justice since 2011 she should have been more forceful in putting her own stamp on the court’s output. But in her eyes she was the head of a collective.

And in her time as chief that collective took some landmark decisions – on the European Union, referendums, criminal law, surrogacy, assisted suicide and, recently, direct provision. It wasn’t an activist court on the scale of the 1960s, but it was innovative and willing to think anew about old problems.

For the late Adrian Hardiman, the court was too quick to side with the State over defendants in criminal cases, an area in which he often found himself in the minority. But even he acknowledged that the court was also willing to take decisions governments didn’t like. For example, Denham and her colleagues were scathing of the executive for failing to enact laws on assisted human reproduction.

In her valedictory remarks on Friday, Denham recalled that when she started out as a barrister 40 years ago, court buildings were damp and musty, with mushrooms growing on the walls. Sometimes court business was done in “borrowed dance halls and bars”.

One of her greatest legacies is a courts structure and system that has changed more in the past 20 years than at any other time since the 1920s.

She was instrumental in the setting up of the Courts Service and the building of the Criminal Courts of Justice in Dublin. The establishment of the Court of Appeal in 2014 had its roots in a report she wrote a decade earlier and lobbied governments to implement.

That role as intermediary between the judiciary and government was to push Denham into the heart of the conflict over pay and pensions between 2009 and 2013. They were fraught years. On occasion the judiciary divided on its approach, with disputes between the Four Courts and Merrion Street regularly spilling into the public domain.

Some judges believed Denham allowed herself to get too close to government, and felt she didn’t share enough information with them. She felt she had a duty to avoid public confrontation, and believed more could be achieved through persuasion than conflict. That was in keeping with her style. But she had ways of exercising her authority.

When John Murray and Adrian Hardiman, who sat beside her in court for a few years, started to speak over one another in their eagerness to berate some hapless barrister, she would gently raise and straighten her hands in a way that only the men who sat beside her could see. It was classic Denham: low-key, unshowy and effective.

“She rarely showed irritation and almost never anger,” her colleague Donal O’Donnell recalled in a tribute on behalf of the court on Friday.

“Only very dedicated Denham watchers would have noticed that on some days the hair band was pushed much further back on the head, the hand rustled impatiently in her envelope of pens and paperclips, and the Gaiety School of Acting could have taken courses in the amount of emotion that could be contained in the act of putting down a pen.”

In his tribute, O’Donnell remarked that Denham’s career had been “characterised by loyalty to the country, to the administration of justice, and perhaps most of all to the institution that is the Supreme Court”. He also spoke of her “quiet and insistent patriotism”. But O’Donnell also noted Denham’s aversion to fuss, her insistence on being clear and direct.

Fittingly, that was how she bowed out. “In conclusion,” she said, “I have enjoyed the honour and privilege of being a judge of this State.” She had been a judge for 26 years, she said, but the time had flown. “So, for the final time, following in the steps of Yeats, I will arise and go now.”