Ian Bailey: ‘I know it is probably not the end of it’ 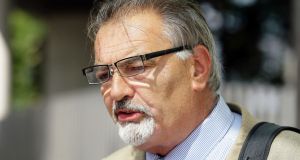 Ian Bailey (60): “I’m very sympathetic to the family and I know that they believe for whatever reason that I had something to do with the death of their daughter.” Photograph: Collins Courts

Ian Bailey has spoken of his relief at the decision by the High Court to refuse to order his extradition to France.

Speaking to The Irish Times Mr Bailey stressed that while he is pleased at the outcome of the High Court proceedings, he doubts that his life will return to any sort of normality in coming months.

“Obviously I am pleased at the judgment of Judge Hunt, who has restored my faith in the independent judiciary of Ireland. But this is not the end of the matter. There are many twists and turns left. The State were not represented at this morning’s proceedings. This is the State that has tortured me for 20 years and they couldn’t get it together to have a representative.”

Mr Bailey said he was conscious that the State may well appeal the decision of the High Court over the next 21 days.

“I know it is probably not the end of it but life goes on. My study goes on and I have released a poetry collection, which is going very well. Our lives for 20 years have been turned over on the basis of a dirty rotten stinking lie.”

On Monday the High Court refused a second attempt by French authorities to have Mr Bailey extradited to face trial over the death of Sophie Toscan du Plantier. Mr Justice Tony Hunt said the second application for his extradition was an abuse of process as the matter had already been decided by the Supreme Court five years ago.

He said he did not know if the French would go ahead with a trial in his absence. When asked if he had a message for the French, Mr Bailey said: “I have always said, I’m very sympathetic to the family and I know that they believe for whatever reason that I had something to do with the death of their daughter. And I’m very sympathetic, but I had nothing to do with it. I can’t say very much more than that.”

Mr Bailey (60) of the Prairie, Liscaha, Schull, west Cork, has long denied any involvement in the death of Sophie Toscan du Plantier, a French national who was found dead outside her home in a remote part of Schull in December 1996.

The Court of Appeal is due to give its decision in Mr Bailey’s appeal against the failure of his civil case against gardaí and the State on Wednesday.