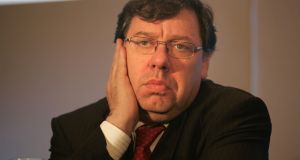 Former taoiseach Brian Cowen who is among a group of Irish investors involved in a dispute with an English law firm. Photograph: The Irish Times

Former taoiseach Brian Cowen is one of a number of Irish investors involved in a dispute with an English law firm which advised them when they bought student flats in Leeds.

More than 40 investors have taken High Court action in England after saying they lost money and accusing Punch Robson Solicitors, which has an office in Middlesbrough, of negligence.

Punch Robson, which is believed to be contesting damages claims, did not respond to a request for comment.

Mr Cowen, taoiseach between 2008 and 2011, features on a list of claimants in legal papers lodged at the High Court in London.

Punch Robson is named as the defendant.

Judges have not yet begun overseeing the High Court hearings.

Mr Waters said the development was completed about 12 years ago and had gone into receivership in 2011.

Mr Waters said his London-based firm Meaby & Co is representing more than 40 claimants who had each paid around £270,000 for apartments bought as investment properties.

He said claimants had taken out mortgages and the “anticipated value” of total damages claims is £14 million (€16 million).

“The claimants all have vast outstanding liabilities with various Irish banks, but primarily the Allied Irish Bank,” said Mr Waters.

“The anticipated value of the claim is £14 million.

“The claimants’ claim against the defendant seeks restitution... an account of profits, equitable compensation or alternatively damages in respect of loss and damage sustained by the claimants in consequence of the defendant’s breach of trust, breach of fiduciary duty and negligence.

“We are aware that UK-based investment schemes of this nature were prominent with Irish investors between 2004 and 2008. At the time, these investment schemes were being sold as having low or no risk with participants generally funding purchases with the benefit of 100 per cent mortgages.

“Properties were often overvalued or failed to perform in line with representations made. Some of these developments have gone into receivership leaving participants with significant outstanding liabilities.

“Hundreds of Irish citizens who bought into ‘risk-free’ schemes have been left with crippling life-time debt. We’re keen to hear from anyone affected.”

Early batch of child flu vaccine to expire within weeks after poor uptake 19:24
Keep up momentum to support older people in their homes, urges Alone 19:13
Postmortems due on two men found dead at hostel in Waterford city 19:06
Prisoners allowed one visit over Christmas period due to Covid-19 18:50
Business ‘buoyant’ as retailers reopen for Christmas shopping 18:47