Teenager to appear in court over Cameron Reilly murder

Body of DKIT student found by dog walker in Dunleer, Co Louth on May 26th 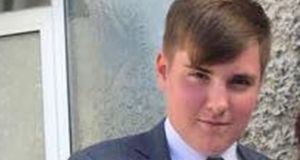 Cameron Reilly was found dead in a field in Dunleer, Co Louth on May 26th.

A teenager is due to appear in court on Friday morning after being arrested in connection with the murder of Cameron Reilly in Co Louth.

The 18-year-old’s remains were found in Dunleer on May 26th by a person who was walking a dog.

He had visible injuries to his neck and gardaí were investigating the possibility that he was strangled.

A male (18) was arrested in relation to his death on Thursday and brought to Drogheda Garda station. He is due to appear before Drogheda District Court at 10am on Friday.

Mr Reilly had just completed his first year in hospitality studies at Dundalk Institute of Technology.

The spot where the body was found in Dunleer is a popular location for young people to congregate.

Gardaí believe a group of teenagers had gathered there and were drinking and taking drugs the night before the remains were discovered.