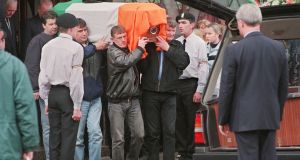 A commission investigating the shooting dead of an armed robber by gardaí has exonerated the detective involved but found there were severe failings by gardaí in the immediate aftermath.

The MacLochlainn commission was established in 2014 to inquire into the death of Real IRA member Ronan MacLochlainn during the attempted robbery of a Securicor van in Wicklow in 1998.

MacLochlainn’s partner, Gráinne Nic Gibb, has long maintained gardaí could have stopped the robbery before it started, meaning they would not have had to shoot him.

In her final report, given to the Department of Justice this week, the commission’s sole member, Mary Rose Gearty SC, said the actions of the garda were “necessary and reasonable”.

On the day, National Surveillance Unit (NSU) detectives were surveilling a van containing Real IRA members when it stopped in front of a Securicor van at Cullimore Bends in Ashford, and blocked it.

However the raiders, including MacLochlainn, fled when they saw the Emergency Response Unit arrive. MacLochlainn pointed a handgun at gardaí, causing one to open fire.

He ran to a car and ordered the two elderly occupants to get out. While in the car, he pointed the gun at another garda who responded by firing twice.

A third garda who was in an NSU car then fired at MacLochlainn. MacLochlainn was hit in the chest and later died at the scene.

The NSU detective sergeant, who was identified in the report as DS-06, was himself killed three years later after being accidently hit by a garda bullet during an incident.

Ms Gearty ruled MacLochlainn had multiple opportunities to surrender. “Mr MacLochlainn did not do so and chose instead to hijack a civilian car, and point his gun for a third time at an approaching guard. The shooting was justified and his own conduct led directly to his death.”

Ms Nic Gibb’s counsel submitted to the commission that had DS-06 not been in the area, MacLochlainn would have been able to escape with no loss of life. Counsel said the NSU should not have been involved as the ERU had taken over by that stage.

Ms Gearty rejected this. She said it was still possible that MacLochlainn could have injured a garda or civilian while fleeing. She added he also could have been shot dead by the other gardaí at the scene.

She noted the two members of the ERU who fired at MacLochlainn only just missed him.

Although she cleared the garda who pulled the trigger, Ms Gearty severely criticised the fact that gardaí moved their cars from the area straight after the shooting.

She found this was a breach of Garda rules and “basic scene preservation” which had a “toxic result”. These failures fuelled the suspicions of MacLochlainn’s family that the shooting had been unjustified.

Ms Gearty rejected the claims by An Garda Síochána that the investigation was thorough. She also found that gardaí did not have a proper command structure or system of co-ordination between the NSU and ERU.

The shooting has been the subject of legal battles for nearly two decades, including civil proceedings lodged by MacLochlainn’s family in 1999 which are still ongoing.

After MacLochlainn’s inquest, his partner went to the European Court of Human Rights alleging the State had failed to properly investigate his death. This prompted the government to establish the commission of investigation in 2014.

Last year, after the commission made its draft ruling, Ms Nic Gibb failed to have the High Court overturn its finding that the shooting was justified.