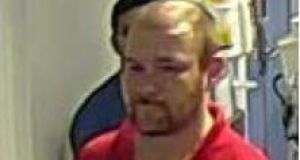 Gardaí have appealed for information on the disappearance from Portlaoise, Co Laois, of a Polish man more than three months ago.

Crimestoppers, the anonymous Garda tipline, called on anyone with information about Rafal Filipowicz (30) to contact it.

Mr Filipowicz went missing after leaving Portlaoise hospital on March 16th. He was last seen travelling towards the Dublin road.

Insp Audrey Dormer, of Carlow Garda station, said Mr Filipowicz had not contacted anyone since he was last seen. “We are very concerned for his safety,” she said.

“I would urge anyone with even the smallest piece of information which may seem insignificant to contact Crimestoppers on 1800-250025,” she said.

Callers to Crimestoppers do not have to leave their name or contact details.

Mr Filipowicz is described as 5ft 11in tall, with short brown receding hair and a tattoo on his right foreman.

When he was last seen leaving Portlaoise hospital he was wearing a red polo shirt, grey tracksuit bottoms and dark-coloured runners.

Crimestoppers chairman Tim Dalton said the ability to leave information anonymously “can be an important incentive and could help solve a case and secure a conviction”.