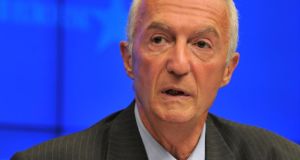 The Garda should establish a dedicated team to ensure unlawful content is removed from the social media and other parts of the internet, the European Union’s counter-terrorism co-ordinator has said.

Gilles de Kerchove said the Garda should have an “internet referral unit” as other Europol member state police forces do.

While members of the public could flag such content, trained police officers were much better at distinguishing between unlawful and distasteful content.

“We have to tolerate distasteful content because that’s free speech; otherwise we’d be living in a dictatorship,” he said.

The success rate of police officers’ requests to have content removed was four times higher than civilians’ requests.

“It’s about division of labour,” Mr de Kerchove said when asked about Ireland establishing a referral unit within the Garda.

Mr Kerchove was speaking to The Irish Times after addressing the Institute of International and European Affairs in Dublin on Wednesday.

While police officers were better at spotting unlawful online content, he said members of the public had a valuable role to play in identifying people who had been radicalised, or at least about whom there were suspicions.

In France, about 20,000 people are on a list of such suspects, many of whom had been identified by members of the public calling a dedicated hotline.

Parents could also contact the hotline and seek advice about what they should do if they believed their children had been radicalised or were at risk.

“When they have exhausted all arguments to convince their children not to leave [to fight in conflict zones]; they have mobilised the state,” he said.

Mr Kerchove said if he found himself in that position he would have no difficulty ringing “the state” and urging them “please stop my son” or to “withdraw the passport or stop him at the border”.

When asked if Ireland should establish a similar hotline, he said it was “part of citizenship” to alert the authorities if they saw or heard something that worried them. In large cities this was particularly important.

In many parts of Europe, including the UK, the likelihood of a terrorism attack was still that of “highly likely”.

“In this context, in a city where you have crowded places, try to tell your citizens if they see something suspicious they should call the state.”