Coroner warns over steroid use after 18-year-old student dies

Family has reservations about inquest findings, says a ‘huge leap of faith’ is required 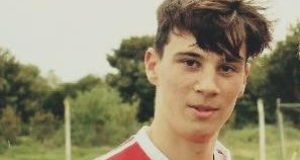 Luke O’Brien May from Co Limerick who died after using a drug called Stanozolol. Photograph via Facebook

The Coroner of Cork City has warned of the dangers of steroid use after a sports loving 18-year-old boy died from using a drug called Stanozolol.

Luke O’Brien May from Grange, Kilmallock, Co Limerick was a skilled sportsman and played rugby, football, hurling and basketball.

“He was a fine young man with all the world ahead of him.”

Mr Comyn recorded a verdict of misadventure in the case after a medic at CUH Dr Robert Plant, and the assistant state Pathologist Dr Margot Bolster, indicated that on the balance of probabilities, Luke developed a swelling of brain because of his usage of the steroid Stanozolol.

The Coroner said he had a duty to warn the public of the “significant health risks” associated with taking steroids.

“Most of these steroids are obtained illegally. You do not know what you are getting. People need to be told of this. I hope people will become aware of the dangers of (these drugs) by Luke’s passing.”

Mr Comyn said he planned to send details of the inquest to the Health Products Regulatory Authority.

He said anabolic steroids used by sportspeople were addictive and individuals trying to give them up experienced side effects.

The inquest heard that Mr O’Brien May, and his younger brother Ross, were doing their Leaving and Junior Certs at the same time.

Brid O’Brien May, mother of the deceased, said her son became ill while completing his Leaving Cert exams.

He had hoped to study Law and Accountancy at the University of Limerick.

He was seen by a GP for a suspected vomiting bug and was hospitalised at University Hospital Limerick on June 13th. He was subsequently transferred to CUH where he died.

Mrs O’Brien May said at one point during the weekend when he was ill, her son had perked up and played frisbee with his dad.

Then he went downhill and became distoriented. He had swapped rooms with his brother Ross and started thinking his old room was his current bedroom.

Mrs O’Brien May said she had “reservations” about the findings in the case, saying there was a “huge leap of faith” about the cause of death.

“My concern is that I brought my son to a hospital. I thought he would get medical treatment but instead of his getting better he was getting worse.”

The young man’s father, Denis O’Brien May, said he had found an empty packet with the name Stanozolol at home and handed it in to medics in Limerick.

Their family GP, Dr Eamonn O’Callaghan said the young man presented at the surgery on the 12th of June with headaches and vomiting.

He was an otherwise healthy young man and had no history of illness. He received the normal treatment given in such situations

Dr Robert Plant, who treated Mr O’Brien May at CUH, said anabolic steroids cause a myriad of damage to the organs.

He said when Mr O’Brien May deteriorated at the hospital, a CT scan revaled a “devastating” swelling of the brain. He said there was a “rapid and vicious spiral downwards” and warned of the dangers of ingesting illicit drugs.

Dr Bolster, said the cause of death was severe cerebral edema and brain stem due to the ingestion of Stanzolol.

She stressed the impact on the body from steroids was an “evolving story.” She stated that quantity was not always an issue as some people can die from low levels of steroids.

The steroid was detected in the body of the deceased at postmortem.

Dr Bolster said the issue wasn’t quantity but whether anabolic steroids “were present or absent.”

At the closure of the inquest the Coroner commended the parents of the deceased for donating his organs following his death, saying that the persons who received them were all doing well and were grateful for their extraordinary gesture at a difficult time.

Mr O’Brien May is survived by his parents and his two younger brothers Paul and Ross.

Among those who expresed condolences at the time of his death were the Limerick Lakers basketball club and Bruff Rugby Football Club.

An annual 5K charity walk was established after his death. On his death notice his family asked that donations be made to Strange Boat Donor Foundation which aims to raise awareness of the need for organ donation.