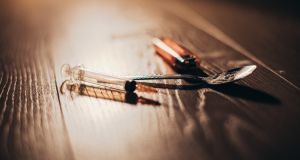 ‘Crack cocaine has got a hold of Dublin now and it’s really, really worrying.’ Photograph: iStock

The number of gardaí attached to drug units across the State has continued to fall despite accelerated Garda recruitment and a surge in drug crime.

Minister for Justice Charlie Flanagan has said the Garda was now increasing in size by about 500 members a year.

Drug crime has been increasing as the economy has recovered and is now back close to levels seen during the boom years.

The number of drug dealing offences recorded nationwide in the first six months of this year, at 2,007, is the highest since the peak of the economic boom in 2008 and the second highest since the CSO began publishing crime data in 2003.

In Dublin alone, drug crime increased by 11 per cent in the first eight months of the year despite the number of drug searches declining by 9 per cent during the same period.

But despite the apparent recovery in the illicit drugs market and accelerated Garda recruitment, the total number of gardaí assigned to drug units is continuing to decline.

Total numbers were lower at the end of August compared with the start of the year. And although recruitment to the force resumed more than 3½ years ago, numbers in the drug units nationwide have declined in each of those years.

The new data on drug unit staffing has been obtained from the Department of Justice by Cllr Noeleen Reilly (Ind).

She represents the Ballymun electorate area in north Dublin. She told The Irish Times there was a marked increase in both open drug use and drug dealing across the capital.

“Crack cocaine has got a hold of Dublin now and it’s really, really worrying. Other world cities have been destroyed by crack and we don’t want Dublin to go the same way,” she said.

“I’ve lived in Ballymun for 13 years. I didn’t live here in what you might call the bad old days,” she said of the suburb before regeneration.

“But people who have lived here since then tell me we are now back to the bad old days. And other councillors across Dublin would have the same complaint.

“These last few years, I’ve never seen it so bad. And while I am the one raising it, this is not just a Ballymun issue,” she said of the situation across Dublin.

The figures she has obtained show the number of Garda members assigned to local drugs units peaked in 2010 at 378 members.

Overall Garda numbers also peaked around that time before declining as a recruitment moratorium was introduced to save money.

Between the peak of 2010 and 2015, when recruitment began again, the number of personnel in drug units across the Garda declined by one-third, or 32 per cent.

There were 258 personnel assigned to the units in 2015, which has since declined to 230 in August.

In Dublin, where most drug dealing occurs, there were 91 members attached to drug units across the six divisions. That was an increase on the 85 members assigned to the units at the start of the year.

However, it remains considerably lower than the 147 officers attached to drug units in Dublin in 2010.