Street assaults: ‘I was walking, minding my own business and got punched from behind’ 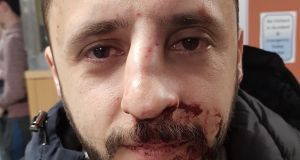 Pedro Andrade after he was attacked by two men who left him with a broken nose.

The number of assaults in public places has reached a record high in recent months, and assaults causing harm are also now at unprecedented levels.

According to CSO figures, there were 18,939 assaults, harassments and related offences last year, up from 17,952 in the previous year.

Certain areas around the country, particularly in Dublin, are set to be targeted with additional high-visibility patrols and surveillance to tackle the rising numbers.

The operation will focus on preventing both assaults and stabbings, gardaí said.

The Irish Times put out a call asking readers to tell us their experience of violence on the streets. More than two-thirds of the respondents were people who had recently moved to Ireland from another country.

Pedro Andrade, who is originally from Brazil but moved to Dublin almost two years ago, said he was assaulted on the South Circular Road in March of this year when returning home from work at about 6.30pm.

“I was walking on the street and I saw two guys crossing the street to my side. When they got close, say about five metres away, I thought that something might be wrong but it was too late. One guy just punched me, he didn’t ask for anything, just punched me,” he said.

“They [the gardaí] found my wallet but not the phone. They broke my nose, and I just got a letter from St James’s Hospital saying there is a four-year waiting list to fix it. It’s still broken, I can’t breathe through the left side,” he said.

Mr Andrade said he was disappointed to experience this in Ireland because he left Brazil to escape the violence he grew up around.

“I left my country to come here because I thought it would be safe. I don’t look like an Irish guy but I would like to believe that it was not a racist attack. I’d like to believe it was just a normal attack and I was unlucky,” he added.

‘I just legged it’

Another man was walking home from work at 3am on the quays in Dublin City Centre two years ago when he was attacked by three men, one of whom pulled a knife on him.

“I was walking, minding my own business, there was nobody on the street, I’m usually aware if there is someone around me or behind me but they just came from nowhere. I got punched from behind. I turned around and there’s this guy in front of me and he said ‘give me everything you have or I’ll stab you right here’. He pulls out a knife and there’s another two guys behind him and they start surrounding me so I just legged it,” he said.

“I ran against the traffic, trying to stop a car so somebody could help me and let me in. I was lucky enough that somebody let me into his car.When I got in the car, the guys threw something at the vehicle. We drove away and then stopped further down where we rang the guards. They came and took my declaration. Then they said we should drive around the block to see if I could identify them. We couldn’t find them.”

He does not think that it was racially-motivated crime. “In my case, I think it was unplanned because there was no way they would have known I was from a different country. I wasn’t talking on the phone or anything.”

Felipe Dias was attacked by a group of five teenagers in the early evening when he was walking towards the Luas in Inchicore last year.

“One of them headlocked me from behind and the others just came around trying to steal from me and punching me and beating me up. They hurt my arm, and my back was sore from the fall when he headlocked me. Other than that it was grand but after everything it made me think about leaving Ireland,” he said.

“I didn’t really know what my future was, and the gardaí, they do their job, but they couldn’t do much about teenagers. I’m an immigrant, but I pay my taxes and it’s really annoying that I was attacked. They don’t pick only immigrants, they will pick anyone, but I do think there probably is an element of racism at play.”

He added: “It was a horrible experience but it has definitely changed me. I’m definitely less naive now.”