‘It’s not a prison’: Inside Oberstown child detention campus

Residents are not offenders, but ‘young people in conflict with the law’, says deputy director 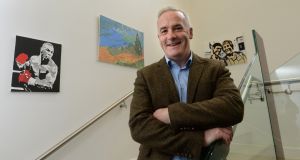 Damien Hernan, deputy director at Oberstown, which is home to some of Ireland’s most troubled children. Photograph: Dara Mac Dónaill/The Irish Times

At the back of every block in Oberstown – Ireland’s secure place to hold troubled, violent children – is a bleak little room completely devoid of furnishing or decoration.

The last time deputy director Damien Hernon was in one of these rooms was about four months ago. Then, a young boy had returned from a court hearing with a bag of 100 Valium tablets tied to his genitals.

In an adult prison the warders would have simply donned a pair of gloves and removed the bag before alerting the gardaí. Such a prisoner may have received a disciplinary notice.

However, things are done differently in Oberstown, which is described as “ a child detention campus”. Instead of reacting physically, the staff tried to convince the teenager to voluntarily hand over the drugs.

When he refused, they put him in the room at the back of the unit for monitoring. He continued to refuse to hand over the drugs; instead, he actually started taking them.

Faced with that, Hernon decided that a threat to life existed. In less than 60 seconds, staff removed the bag of pills using a Hoffman knife, a tool they usually use to cut people down who have tried to commit suicide.

The room is sparse for a reason, Hernon tells The Irish Times. Putting anything in it increases the risk level; even a cushion or beanbag might be turned into a ligature.

Besides, he says, a young person is only ever put in here for the shortest time possible. Asked if someone might have to spend the night here, Hernon quickly shakes his head.

This is not a side of Oberstown staff like to advertise. Hernon tells the story to emphasise how rare such incidents have become. So far this year solitary confinement – or “single seclusion”, as it is called in Oberstown – has happened 600 times, down from over 3,000 just two years ago.

However, discipline incidents such as fights and assaults have more than doubled during that same period, but Oberstown says this is reflective of better reporting standards from staff rather than increased violence.

A new system, called Management of Actual or Potential Aggression (Mapa), has significantly reduced the need to separate troublesome detainees from their peers. It involves staff assessing potentially violent situations and using the minimum amount of intervention necessary.

Usually, says Hernon, this involves taking the young person aside for a chat and giving them a minute alone to compose themselves.

Euphemisms and acronyms are everywhere in Oberstown. Its occupants are not offenders – they are “young people in conflict with the law”, according to a pamphlet sent to the media in a gallant but perhaps vain effort to modify the language of newspaper headlines. There are no wardens on campus, only “residential social care workers”.

And cells aren’t cells, they’re “bedrooms” or “residential units” (although the the cast concrete beds and metal doors certainly make them resemble cells).

“It’s not a prison,” says Hernon, and the language and general attitudes are intended to reflect that. For example, every morning residents help plan their own day, he explains while showing off the facility’s impressive sports hall. “We give them input, otherwise they wouldn’t buy into things.”

Oberstown is not a prison but it shares some of the same problems faced by prisons. Drugs do come in, although it is mostly cannabis or amphetamines rather than heroin or crack, says director Pat Bergin.

“In the five years I’ve been here I don’t think we’ve had anyone being treated for heroin addiction.”

The most common route is residents smuggling drugs back in from the outside, after court or home visits. Sometimes family members will also smuggle in substances. Oberstown’s ethos (“it’s not a prison”) means it is impossible to completely stop the flow of contraband, although scanners and X-ray machines have recently been installed.

A few years ago there was a glut of escapes, with residents taking advantage of building works on campus to abscond

Unlike Mountjoy, where the Hutch-Kinahan feud has resulted in large numbers of inmates spending up to 23 hours a day locked in their cell, there is not much of a gang problem in Oberstown, says Bergin.

Sometimes young people have to be put in separate units because their families are feuding, but it is rare.

“The urban/rural divide is a bigger issue,” he says.

Escapes have been a problem in the past. A few years ago there was a glut of escapes, with residents taking advantage of building works on campus to abscond.

According to Hernon, no one has escaped in three years. Indeed, it’s hard to imagine how even the most agile teenager could scale the massive green fences encircling the campus.

Oberstown staff are proud of what they do and fiercely protective of the residents, especially when it comes to their privacy. This is evident as Hernon shows off the school unit and its colourful classrooms and workshops.

He describes one resident who has recently completed his Leaving Certificate and who will be going to university on his release. “I don’t think that’s ever happened before,” he says with a smile.

The facility had a terrible year in 2016, not least because of a riot which led to a major fire and the deployment of armed gardaí.

Now, three years later, there is a feeling it has turned a corner. This is helped by the fact that there are currently only 33 residents on campus, making it just over half full. It gives a bit of “breathing space”, says Bergin, who puts the reduced numbers down to the increasing use of the diversion programmes for young offenders.

Many young people who arrive are at first extremely unhappy.

“Some of them arrive in their school uniform crying because they don’t know what’s happening. Their anxiety hits the roof,” says Hernon.

But most adjust and by the end of their sentences some don’t want to leave.

“Sometimes it’s the first stability they’ve had in their lives,” he says.

The vast majority of residents return to their families after Oberstown, while some will go into the care of Tusla. An unfortunate few, those serving lengthy sentences, will go directly to an adult prison once they reach 18½.

Prison staff visit Oberstown before any transfer to explain what residents can expect. Nevertheless, some don’t understand that it’s “a completely different world”, Bergin says.

Sometimes boys will insist on transferring the minute they turn 18.

“And sometimes you get a call a bit later saying they’ve changed their minds.”

He describes one teen due to go to Wheatfield who is resigned to a lengthy stay in prison, almost as if it had always been his inevitable destination.

“He says this is the life he leads. And that he can smoke up there,” Bergin says. “If that’s the attitude there’s nothing you can do about it.”