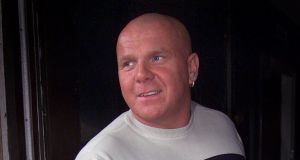 Johnny Adair has told BBC’s Spotlight programme that a stockpile of new weapons ‘came confidence to the men’. Photograph: PA

Former UDA commander Johnny Adair has described the deadly arsenal of weapons it received from the Ulster Resistance movement in the early 1990s as “a Godsend”.

Speaking to the BBC for their new series, Spotlight On The Troubles: A Secret History, which will be broadcast on Tuesday, the loyalist figure talks about the assault rifles and rocket launchers brought into Northern Ireland by Ulster Resistance, via South Africa in 1987.

The weapons, which ended up in the hands of the UVF and the UDA, helped escalate loyalist violence and led to loyalist paramilitaries killing at a faster the IRA for the first time in the conflict.

Adair, known as “Mad Dog”, told the programme: “Our organisations did not have an assault rifle, and it wasn’t until these weapons came, this shipment came in, that the UDA, UFF, then took control of assault rifles.

The 55-year-old, who was later convicted of directing terrorism, has never confirmed the weapons came from Ulster Resistance, but a secret police report obtained by Spotlight into Adair and his role in directing terrorism indicates in 1991 he had developed a contact in the movement as a direct line of weapons supply.

VZ58 assault rifles imported into the North by Ulster Resistance in 1987 killed at least 70 people and were used in three massacres. On February 5th, 1992, a mass shooting took place at the Sean Graham bookmaker’s shop on the Lower Ormeau Road in Belfast.

The UDA opened fire indiscriminately on customers, killing five civilians and wounding another nine. In October 1993 UDA members opened fire on civilians in a crowded pub during a Halloween party in Greysteel, Co Derry.

Eight people were killed and 19 injured. In June 1994 the UVF used Ulster Resistance rifles to kill six men who were watching Ireland play in the World Cup inside the Heights bar in the Co Down village of Loughinisland.

Ulster Resistance was formally launched at a mass rally in the Ulster Hall in Belfast in November 1986 in protest against the Anglo-Irish Agreement. The programme shows footage of the late DUP leader Ian Paisley appearing on the platform with the then DUP deputy leader, Peter Robinson and Sammy Wilson, now MP for East Antrim.

By the time Ulster Resistance was publicly linked to weapons the DUP leadership had dissociated itself from it. Police intelligence indicates a month after the launch event members of Ulster Resistance began meeting with other loyalist paramilitary groups to discuss smuggling weapons into the North.

The chief arms smuggler was Noel Little from Co Armagh, a leader within Ulster Resistance. Mr Little is the father of current South Belfast DUP MP Emma Little-Pengelly. He travelled to Geneva and Paris in early 1987 to meet a representative of a South African arms company named Douglas Bernhardt.

Tuesday night’s programme reveals statements made by Bernhardt to the French secret police at the time. Bernhardt told them that Noel Little – using the cover name ‘Joseph Kelly’ – had come to him with a shopping list of weapons including Ak47 assault rifles, 9mm pistols, APG7 machine guns, grenades, mortars, and thousands of rounds of ammunition.

Bernhardt told police that Little had, “explained that the loyalists of Northern Ireland were looking for arms to defend themselves against the IRA”. According to Bernhardt, Noel Little paid $120,000 dollars for a shipment that was smuggled into Northern Ireland at the end of 1987.

The arms were split three ways between Ulster Resistance, the Ulster Defence Association and the Ulster Volunteer Force. The UDA had their share intercepted almost immediately while the UVF lost most of theirs a short time later.

Automatic rifles, rocket launchers, grenades and thousands of rounds of ammunition belonging to Ulster Resistance were not captured.

The programme also reveals new details about army agent, Brian Nelson, who first went to South Africa to source weapons for loyalists in 1985 and later helped them target individuals for assassination in his role as the UDA’s senior intelligence officer. Johnny Adair told the programme: “I was part of it, worked on that intelligence and to date I have never been arrested for anything that I have worked with or under Brian Nelson. Not one thing.”

The fifth episode in the series also contains new information about MI5 and army agents at the heart of the UDA, and fresh revelations about the inquiry into the murder of human rights lawyer, Patrick Finucane at his north Belfast home in 1989.