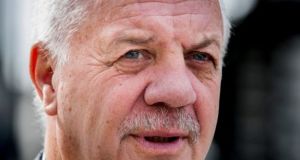 Raymond McCord outside the Royal Courts of Justice in Belfast. Photograph: PA

The Court of Appeal in Belfast has dismissed an application that the UK government’s Brexit policy will damage the Northern Ireland peace process.

Three applicants appealed against a Belfast High Court judgment that rejected their challenge against the UK government’s handling of the Brexit process.

One of the applicants was high-profile victims’ campaigner Raymond McCord, whose son was murdered by loyalist paramilitaries in 1997.

It comes after the British Supreme Court unanimously ruled that prime minister Boris Johnson acted unlawfully in shutting down parliament for five weeks.

The three challenges focused on various aspects of a no-deal Brexit on October 31st.

During the appeal hearing last week, Barry McDonald QC argued the European Union (Withdrawal) Act passed by parliament in 2018 compelled the UK government to seek a deal that protected north-south co-operation on the island of Ireland and ensured there was no new border infrastructure erected.

He said an exit that resulted in a hard border would run contrary to the “will ofparliament”.

However, the Court of Appeal concluded there was no breach of section 10 of the Withdrawal Act.

The judges granted leave to apply for judicial review in respect of the section 10 Withdrawal Act issue only, but dismissed that application.

It was also argued that the UK government’s Brexit policy will damage the Northern Ireland peace process and would have an “adverse impact” on the local economy.

Mr McCord’s barrister Ronan Lavery QC told the appeal hearing that if a Brexit extension could not be secured by the Government in the absence of a deal, then the default position should be halting Brexit - through the revocation of Article 50 - rather than exiting with no deal.

Mr McCord, who was not at court due to ill health, said he would study the Belfast Court of Appeal judgment with his lawyer.

“I, along with many other people, believe that it (Brexit) will affect the peace process,” he said.

“I hope I am proven wrong. We did not take this case to alarm people, it is what I believe in.

“It would be nice if in the coming years people can come across and say: ‘Look Raymond, you were wrong. It did not affect the peace process.‘

“I don’t want it to affect the peace process.

“I don’t want people to go through what my family and members of other families have went through.

“I respect the judgement of the Appeal Court in every way, I believe the judges sitting there are amongst the best judges in the UK.

“I have to respect their judgment.

“However, it is a fear I have that the peace process will be affected.” - PA