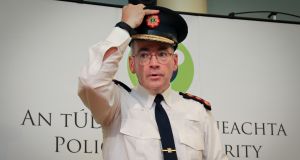 A specialist Garda unit has seized €167 million in drugs, €10 million in cash and 108 firearms along with some 3,000 rounds of ammunition from criminal gangs since it was established five years ago.

Garda Commissioner Drew Harris set out in his latest report to the Policing Authority on how the Drugs and Organised Crime Bureau had successfully struck against suspects over the past month.

He said that in one case “a vehicle failed to stop for gardaí” and collided with a roundabout in north Dublin.

“The three occupants alighted from the vehicle and were followed on foot,” Mr Harris wrote in his November report to the authority, which oversees the force’s performance.

“One of the occupants dropped a package, which, when recovered, was found to contain a firearm and ammunition. A male was arrested on suspicion of unlawful possession of a firearm.”

In another case, also in north Dublin, members of the bureau stopped a car – carrying three men – in which a gun and ammunition were also found.

In a third, unrelated recent case, the bureau carried out a search in Dublin targeting a drug gang and found €650,000 in cash.

Minister for Justice Charlie Flanagan said the bureau had this year been responsible for the seizure of €20 million worth of drugs, €2.4 million in cash believed to be the proceeds of crime and 17 firearms.

Mr Harris told the authority the Garda was on course to remain within its core budget for the year, with expenditure to the end of October at some €1.37 billion, €2.7 million less than projected.

“The year to date underspend is due to a combination of the implementation of a programme to reduce expenditure, capital and current, by €36 million, and the termination of any discretionary expenditure,” Mr Harris wrote.

The Garda overtime spend had, however, reached €92.4 million by the end of October, some €13 million over budget. This will be alleviated by a supplementary estimate for the force of €17.5 million linked to the costs of the visits to Ireland of US president Donald Trump and vice-president Mike Pence.

Meanwhile, the strength of the Garda force, which was being expanded under an accelerated period of recruitment, had reached 14,166 sworn members by the end of October. Of these, 10,359 were male and 3,807 were female. There were also 3,164 Garda staff – civilian employees – of which 2,322 were female and 842 male and the Garda Reserve numbered 466.

Some 85 per cent of sworn Garda members had signed the code of ethics, he said, with 61 per cent of civilian staff and 29 per cent of reservists also signing it. This means a fifth of the total force have yet to sign the code – failure to do so precludes members from eligibility for promotion.