Pensioner arrested after seizure of €200,000 worth of cannabis 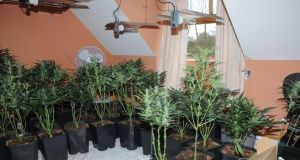 A grow house which was discovered in Co Carlow. Photograph: Garda Press Office

A man in his 70s has been arrested after cannabis worth €200,000 was seized at his Co Carlow home.

The cannabis was discovered after the man called emergency services to a fire at the house on Thursday.

Emergency services attended the fire at the house in Rathvilly at about 9.30am.

Gardaí discovered a grow house with 250 cannabis plants at the property after the fire was extinguished.

The man was arrested at the scene and is being held at Carlow Garda station.

Gardaí said they are seeking a second man who had escaped through the back of the property.