Driver who killed mother and injured infant freed from jail 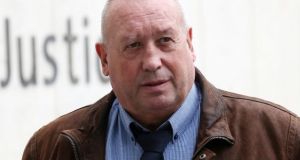 Anthony Handley has won an appeal against his sentence for dangerous driving causing death, with the court saying the two-year sentence imposed was unduly harsh. Photograph: Collins Courts

A man who killed a young mother and seriously injured her 15-week-old child when he hit them with his car while in “a micro-sleep” has had the balance of a two-year jail term suspended on appeal.

Gardaí believe Handley drifted off momentarily before his off-road SUV veered from the road and hit the two victims. He had no alcohol or drugs in his system.

Sentencing Handley to two years imprisonment in May 2016, Judge Patrick McCartan said he was a good man with a blameless record, but that he should have been alert to the fact that he was becoming tired behind the wheel.

The judge said he was imposing a two-year sentence “to send out the clear message to the community that fatigue must be a phenomenon in the minds of all drivers”. He also banned Handley from driving for 10 years.

On Friday, the Court of Appeal found a number of errors in the sentencing. Handley was given a new two-year jail term but had the balance suspended on conditions. His driving ban was unchanged.

Giving judgment in the three-judge court, Mr Justice Alan Mahon said Handley, who had had only four hours’ sleep overnight, was driving towards Balbriggan shortly after midday on the day in question when he lost control of his car and swerved across the road, striking a young mother wheeling her child in a buggy.

Handley was unable to explain why the crash occurred. It was initially suspected that he suffered a mini-stroke, a possibility put under intense medical scrutiny.

Ultimately, the medical evidence suggested otherwise, and the only other rational explanation was that Handley had fallen asleep. This likely cause prompted him to plead guilty.

Ms Dunne was killed instantly and her daughter was significantly injured. Such were Éabha’s injuries that she was not expected to survive. But she “defied the odds”, according to the court’s judgment.

The court was anxious to emphasise that, by any standard, the accident was a dreadful tragedy.

Mr Justice Mahon said the sentencing judge “unfairly penalised” Handley for the delay in pleading guilty; “erroneously attributed” to Handley a motivation to explore “the depth of a technical or other defence”; deemed his efforts to investigate the medical cause for the crash as in some way diminishing of his remorse; and attached insufficient weight to the mitigating factors, particularly his role as main carer for his estranged wife.