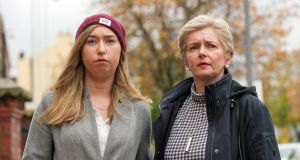 The daughter of a man shot dead two years ago near his home in Co Cork has called for the criminal justice process to be speeded up after the man accused of the killing died before the case could come to trial.

Deirdre Coakley (22) said she felt that she and her mother, Siobhan did not get justice for her father, Derry after the accused man, Gerard Lynch died before he could be tried on a murder charge over the killing.

“I feel the justice system wasn’t up to scratch, they are just not up to scratch on things like this – it’s too slow – Gerard Lynch was two years sitting at home in his own comfort – he only went to prison for a few weeks at the start.”

“I wish to bring to the court’s attention that on August 10th the accused had indicated his wish to plead [guilty] to a count of manslaughter. It was not possible to proceed with this as he was very unwell.

“Because of Covid-19 it was not possible to bring things any further. The State is entering a nolle prosequi. He passed away on August 21st. The family of the deceased are present.

“They were present on the day when it was indicated he would plead to manslaughter were it possible for it to be done because of the unusual circumstances in which the whole country finds itself.”

Defence counsel, Tim O’Leary SC said Mr Lynch had indicated in May 2020 that he was willing to plead guilty to manslaughter when the case was mentioned at the Central Criminal Court in Dublin but this was not accepted by the DPP.

“For the avoidance of doubt it is right to say that offer was refused. It was only when the illness of my client became more obvious that on August 10th an application was made to seek to have a home situation for the taking of a plea.

“But it could not be organised and he died 11 days later. I think it is important for both families in the circumstances for the avoidance of doubt that there was an application in August of this year,” said Mr O’Leary SC.

An inquest in April 2019 heard that Mr Coakley from Castle Street, Macroom bled to death after he was shot in the left arm when dumping building rubble at a site at Curraheen, Raleigh North just outside Macroom town.

Assistant State pathologist, Dr Margot Bolster told the inquest at South Cork Coroner’s Court sitting in Macroom that Mr Coakley died from haemorrhage and shock due to a single gunshot wound to the arm.

Speaking after today’s hearing, Ms Coakley said she didn’t feel she had got justice for her father even though she agreed with the DPP’s decision to refuse a manslaughter plea in May as she believed her father had been murdered.

“We were happy with the DPP’s decision in May to reject the manslaughter plea – 100 per cent, it was murder – I didn’t want anything less .... manslaughter doesn’t even begin to cover what he did to my dad,” said Ms Coakley.

“I was in constant contact with the gardaí in Macroom and they tried their best – we went up to the Criminal Court in Dublin in August but they explained that there was no more they could do, Gerard Lynch was gone too far.”

Ms Coakley expressed her gratitude to the gardaí, in particular family liaison officer, Garda Lisa Hyde and Supt Joe Moore for their support.

Asked if she was able to draw any comfort from the fact Ms Lankford had put it on the record that the late Mr Lynch was willing to plead to manslaughter, Ms Coakley said it offered little comfort to her or her family.

“Nothing was ever going to bring my dad back but having that ruling (a murder verdict) would have been nice – he didn’t deserve this – I feel no one knows now, it feels like someone has just pulled a black sheet over it and that’s it.”

“My dad was my rock – he was the best father I could ever have had ... it’s a constant battle every day - sometimes people forget and they move on with their lives and they are allowed to get on with things but we are stuck.

“He always told me to walk away from a fight. If I ever fell out with somebody, he would say ‘Do you know the best thing you can do now is walk away’ so for this to happen, it was definitely unprovoked because he walked away.”