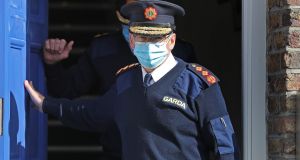 Garda Commissioner Drew Harris, at least one Garda assistant commissioner and other senior members of the force have had to restrict their movements and have undergone Covid-19 testing after a Garda officer they work with tested positive for the virus.

The Irish Times understands the officer who contracted the virus believes he did so at a setting away from his work.

The officer who has since been confirmed as a positive Covid-19 case was in a room with Mr Harris for a prolonged period recently, though Mr Harris was tested for the virus at the weekend and the result proved negative.

It was only after that meeting with Mr Harris that the officer believed he should go for testing, which then confirmed that he had the virus.

Other senior Garda officers based at Garda Headquarters, Phoenix Park, Dublin, were also in close contact with the senior member of the force now confirmed as a Covid-19 case and they have been limiting their movements and have undergone testing.

In reply to queries, Garda Headquarters at Phoenix Park, Dublin, confirmed Mr Harris’s close contact with a person who has since tested positive for the virus.

“Following a socially distant meeting late last week between the Garda Commissioner and one other person who a few days later tested positive for Covid-19, Commissioner Harris was tested for Covid-19 at the weekend. The test was negative,” the statement read.

“In line with public health guidelines, since being informed of this close contact the Commissioner has been restricting his movements, but continues to carry out his duties.

“Public health advice was also followed at this meeting in relation to use of masks and hand sanitiser.

“Separately, following being identified as ‘close contacts’ of a positive Covid-19 case, a number of other members are currently ‘restricting movement’ in accordance with HSE public health guidelines.”

Garda Headquarters added that the Garda members who were limiting their movements “remain available for duty” and were working remotely.

“An individual member’s medical condition is private information to them. There is currently no impact on any services of An Garda Síochána.”